‘You can’t opt out of IoT’: Our future is the Rise of the Sensor Machines 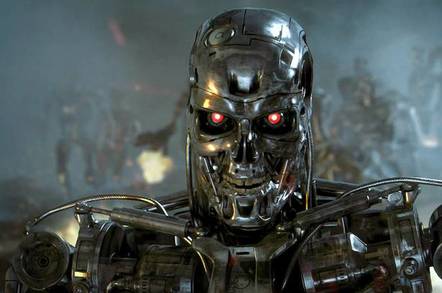 He's not trying to kill you, he's telling you to do more exercise...

IPExpo “The majority of SMEs are bamboozled by the Internet of Things and how it will support their business,” Mike van Bunnens, MD of comms tech firm Comms365 told The Register today.

Predicting a future where “everything” is an IoT device that “binds us together”, van Bunnens - flanked by colleagues Shaun Nicholls and Nick Sacke - waxed lyrical about what the trio see as the inevitable rise and rise of IoT across an increasing number of industries.

“People are interested in footfall, demographics, and even in automotives,” said Sacke, “looking at advanced telematics and driver behaviour.”

Comms365 is a “ISP with a twist” that provides, as its name suggests, communications infrastructure, particularly private networks. While the firm specialises in machine-to-machine (M2M) communications and providing backhaul for sensors in that field, they are expanding gradually into what the rest of us see as IoT.

“We have solutions that can demonstrate operational efficiency, cost savings and even revenue generation,” Sacke dutifully chipped in.

“I see IoT as a term that people use because it’s new and they want to latch onto a description of something that’s already happening,” van Bunnens said, boldly predicting that “within three to five years the term Internet of Things won’t be used.” Sacke added: “The IoT is a bit of a misnomer… we’re really about private networks.”

Van Bunnens was bullish about IoT’s prospects for mass adoption when El Reg asked whether he thought it would go mainstream: “SMEs will be using it without actually realising they’re using it,” he said. “Just because someone’s called it something different, like it or not, you’ll be using something that falls under that definition.”

In his view, IoT infrastructure projects have quietly taken over most of the world already. “We ourselves are in a smart city where they’re trying out traffic and environmental projects,” he said, in a nod to London’s IoT-friendly mesh network rollout. “People are wearing IoT friendly tech, or working within an IoT-enabled office or driving an IoT-capable car,” he added, saying it’s a matter of time before all these technologies are brought into play with each other.

As for Comms365 itself, the company has “been connecting machines for many years,” in Sacke’s words. Most of their customers aren’t so interested in the generated datasets per se - though those do have a value - but in the “exceptions to those normal graphs”.

“It’s not just about connecting, it’s about extracting value from the transactions,” explained Sacke. He gave the example of a water pump fitted with sensors to measure water pressure, current draw and motor vibration.

“If you were to monitor that output in real time,” he said, filtering out the abnormal signals “and get those to a decision maker who knew that the pump is about to fail, you could implement a proactive maintenance schedule.” A pretty straightforward IoT use case.

Confidence? Well, about that....

El Reg wondered, while it’s all well and good that industrial IoT, or M2M, is being increasingly widely adopted by the big dogs of the corporate world, what do consumers think, what with stories such as the DDoSing of infosec journalist Brian Krebs by a botnet comprised chiefly of hacked IoT devices?

Van Bunnen was expansive, explaining how “big things which knock consumer confidence considerably” such as the Krebs DDoS “knocks back deployment by months, if not years.”

“It’s down to us to educate people that IoT has to deployed sensibly, in that private environment, and be really carefully controlled,” he added.

Regulators are already becoming concerned at some of the uses that IoT sensor technology can be put to. Sacke highlighted a US shopping mall using an ad-targeting system which “looks at my height, general build, estimating my age, then the screen pushes content at me based on my demographic.”

As van Bunnnen said, “I don’t know whether youl ever be able to give consumers 100 per cent confidence that their data won’t be hacked and used inappropriately.”

Rise of the Machines? Oh yes

The capability already exists for IoT tech to have a direct, and positive, impact on our lives, said Nicholls: “Imagine you’re working in an office. The environment senses you’re feeling a bit drowsy; the light changes, the temperature in the office changes around your position, then it lets you work harder and faster.”

“That progresses out into the street and everywhere you work,” he added, rather ominously describing a vision of the future where your smartphone urges you not to catch a bus from your regular bus stop but instead to walk to the next one, where - thanks to, say, your health insurance - you can collect a free piece of fruit from the shop next to it, the general idea being to make you fitter. “If you do this, you could be able to get a discount off your insurance policy,” he said.

Sacke continued on this theme: “I read an analyst report where they talked about IoT being the infrastructure of the information society. It will bind us all together, it will be the way we exchange information and the way we live. It will be a primary mover in our lives.”

Van Bunnens enthusiastically agreed: “Consumer and corporate IoT is still quite human interaction heavy… when IoT hits the mainstream there’ll be no human interaction. You won’t have to think about it.”

Pre-emptively bowing the knee to our future robot overlords, Sacke said: “I hesitate to use the film analogy but it’ll be like Terminator: Rise of the Machines.”

Indeed. Let’s hope the future of IoT is more about naggy smartphones than a mechanised Arnie hunting down various unlucky humans. ®

On Call 'This report is taking ages to print, let me take a closer l-argh!'

Drones aren't evil and won't trigger the Rise of the Machines: MoD

Rise of the Machines: ROBOT KILLS MAN at Volkswagen plant

ROTM It's coming for your jobs, very, very slowly