By Monica Grady Professor of Planetary and Space Sciences, The Open University 4 Oct 2016 at 09:07
16 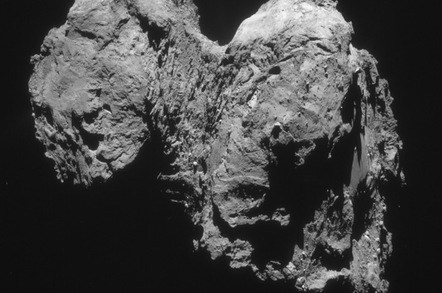 It has been an epic journey, much more than 12 years in the making, but Rosetta has gone out in a blaze of glory. The final commands were uploaded to the spacecraft mid-morning on September 29 – and now there is no going back. Rosetta was programmed to touch down on comet 67P some time in the late morning of September 30.

It is not a suicide crash, as some have described the maneuvre, but should (we all hope) be a graceful, slow-motion glide onto the comet’s surface.

So what has been achieved by this mission? What do we know now that we didn’t know before? For a start, a new discipline has been invented: cometary morphology – the study of a comet’s surface. The images sent back, first by the navigation cameras and then by the higher resolution Osiris instrument, have been unbelievable. Take a black and white picture of a dried-up river bed, or the layers of rock exposed in the walls of a narrow, steep-sided canyon on Earth, and compare them with some of the landscapes we have seen on 67P, and you could be looking at the same features.

But we know that rivers have never carved their way across the surface of a comet, or sediments laid down in shallow seas. So how do we interpret these landscapes if we do not understand the processes that have caused them?

There have been other discoveries, too. Scientists analysing the data from the comet discovered molecules that can form sugars and amino acids – which are the building blocks of life as we know it. Another paper unveiled the source of ice and dust jets on the comet. 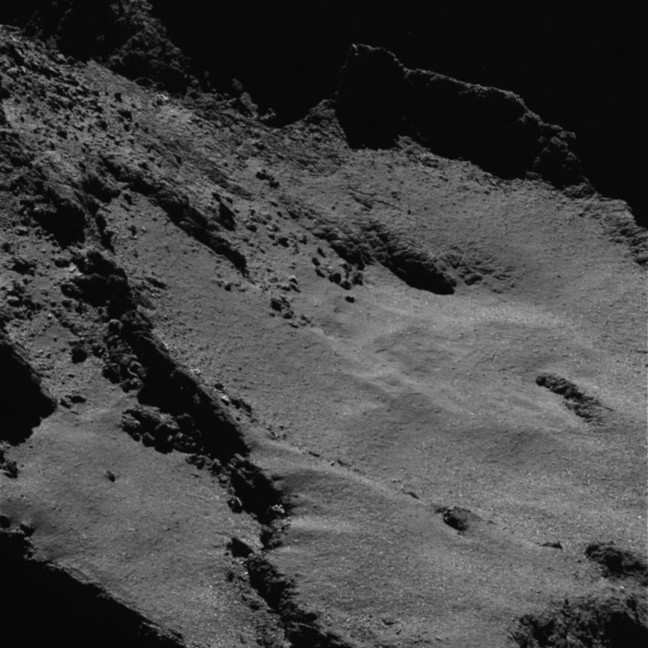 Close-up view of the comet as Rosetta is coming down to surface. Photo by ESA, CC BY-SA

Of course, perhaps the most spectacular achievement of the Rosetta mission was the landing of Philae on the surface of 67P. Although the lander bounced a couple of times before finally coming to rest on its side, in the dark, under a cliff – rather than in the middle of a flat, open, sunlit plain – the instruments on-board Philae managed to achieve almost all the planned science goals. Those that were not completed required specimens to be retrieved by the drill – which was not possible, given that Philae was not upright.

More than a year ago, the Philae teams were resigned to the idea that their direct involvement in the Rosetta mission was over and that the lander was consigned to eternal hibernation. But, at the beginning of September, months of close and careful investigation of images of 67P’s surface paid off and Philae’s resting place was discovered.

The delight of the instrument teams was not merely an emotional response to locating the missing lander – finding Philae has enabled additional information to be recovered from data acquired by the lander’s instruments, as the physical context in which the data were gathered is now known. This will enable a more complete interpretation of structural and environmental data, which had been recorded without knowing the conditions under which they were collected.

Rosetta’s sojourn close to the cometary nucleus has not been without peril – sudden jets from the pits described as “goosebumps” released bursts of gas and dust which, on several occasions, confused Rosetta. This was because the spacecraft navigated by the stars – and a cloud of dust grains reflecting sunlight bears a close resemblance to a star field of many thousands of stars, resulting in sending Rosetta’s star tracker astray.

Each time this happened, Rosetta might have crashed into 67P, or sent itself flying off into the deep unknown – but each time, swift responses by engineers back on Earth were able to rescue the craft from the brink of danger.

During its closest approach to the sun, Rosetta wove a convoluted path around the comet – sometimes nearer, sometimes farther away, depending on surface activity. This behaviour ensured that there was always at least one very happy instrument team – and one very irritated one. This is because some of the scientists are interested in dust, so are happy to see it. To other teams, however, dust gets in the way of images, and is a concern for navigation.

Downloading and reducing results from Rosetta and Philae’s instruments is well under way, and efforts are in progress to interpret the data and understand their significance. But it will be some time yet before we manage to integrate all the findings into updated models of solar system formation. Maybe we will have got it finished before the next cometary mission launches? ®

Tune in at 10:40PM UTC next Friday for a 'controlled crash'

This was the outward journey of the starship Rosetta ...