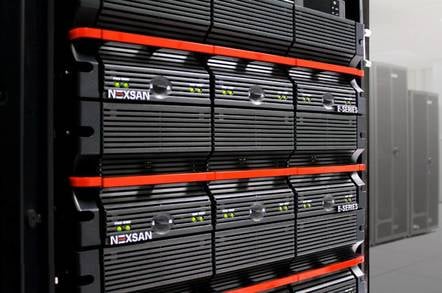 Grey’s Twitter profile declares she is “Acting CMO for Nexsan.” She was CMO for hyper-converged vendor HyperGrid from March 2014 to August this year. Prior to that she was CMO for Soonr (file sharing) from May 2013 and SVP for Marketing at Nexsan from September 2010 to March 2013. She joined Nexsan from Quantum, where she was VP for Marketing from September 2008 – a role just assumed by DDN’s Molly Rector.

Imation bought Nexsan for $120m in January 2013, following which Grey left for Soonr two months later, and now she's back.

Just a week or so ago, Nexsan announced it had appointed Tony Craythorne as its SVP for sales, although his LinkedIn profile says his Nexsan joining date was May 2016.

At Nexsan, CEO Bob Fernander wants the company and its products to have a higher profile and bring in more revenue; that's what Grey and Craythorne have been hired to do. At HyperGrid, chairman and CEO Nariman Teymourian wants the same thing for HyperGrid’s products but he now has a CMO hole to fill. ®