My moment face-to-face with Google's AI: It feels your pain, sometimes 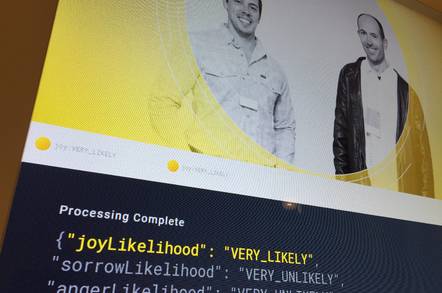 Comment At Google's Horizon cloud event in San Francisco on Tuesday, the ad giant demonstrated its Cloud Vision API through what it called the GCP Emotobooth. Less of a booth than a corner of a room covered by a connected camera, the experience combined all the forced fun of making faces on demand with the dubious pleasure of having one's mind read by a machine.

In fact, Google's computer vision software was attempting to evaluate my facial expressions, and to then infer my emotional state. In order for the machine to have a fighting chance, the menu of emotions was limited to surprise, sorrow, anger, or joy.

The Googlers presiding over the demonstration urged a fellow attendee and me, to be surprised, sad, angry, and happy for the camera. The images of our grimaces and grins were then processed by the Cloud Vision API in an effort to identify our expressions. Were it a casting call, neither of us would have landed the role.

The results were OK. The algorithm correctly detected the joy we were faking. But it mistook my attempt to feign surprise as more glee. My sad and angry faces left the algorithm uncertain and unable to render a decisive verdict on my theatrics.

Others apparently conveyed their expressions more convincingly. The images gracing the GCP Emotobooth's Twitter presence and those displayed on location show brightly colored halos rather than gray ones – the color indicates the algorithm's confidence in its assessment.

As a development tool, the Cloud Vision API is a marvel. Being able to make a few API calls and identify an image has many potential applications. Some of them may even be useful. But the suggestion put forth by the Emotobooth minders, that companies could use the technology to evaluate customer sentiment, might not be the best way to engage with people.

Technology can do wonders at scale, but also it's the source of the world's most insincere phrase, "Your call is very important to us." Relationships require engagement that doesn't scale. It would be a mistake to believe feelings can be measured, sorted, and dealt with based on calculations in the cloud. ®