Citizen boffins: Help find the alien that ultimately kills us all 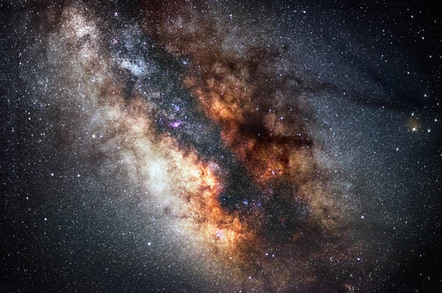 The SETI project, which hunts for alien life and has generated hundreds of terabytes of data every day, has poured its bits over IBM’s cloud for citizen scientists to pick over.

SETI – the Search for Extra Terrestrial Intelligence – is releasing 16TB of radio telescope transmissions drawn from the Allan Telescope Array to scrutiny on IBM’s cloud under SETI@IBMCloud.

IBM has rolled a system using its Cloud Data Services, which it reckons is battle ready to serve up gobs of radio telescope data for mass probing by the public.

SETI’s data had been uploaded to IBM’s data storage and Spark service in July 2015. In making the SETI@IBMCloud available to the wider world, however, SETI hopes to dramatically increase its chances of finally tracking down ET.

The idea is citizen coders build apps capable of querying the data, potentially spotting things that SETI’s full-time technicians may have missed.

Despite the amount of data collected thus far, because the SETI Institute has a finite number of scientists, most of their data have not yet been analyzed in novel ways. They are looking for YOU to help develop those new ways to search for signs of extraterrestrial intelligent life.

Are there patterns in SETI’s data that have been overlooked thus far? We’ll show you how to read the data and extract features. Can your signal processing algorithm detect signals that SETI cannot? If so, your code could end up in SETI’s data acquisition system. Or you might even be the first to discover intelligent alien life!

ATA scans 30 million channels simultaneously producing 100TB and 200TB each day for SETI scientists to pour through. Just 16TB of SETI data is on IBM’s cloud.

Scientists are hunting for the next “WOW” signal that came from SETI”s Project Big Ear in 1977. WOW was an unexplained signal spotted by Big Ear, traced back to a densely populated cluster of 100,000 stars in the Sagittarius constellation.

However, it was only identified three days after the signal was captured by the radio telescope.

WOW signals differ from “ordinary” cosmic noise. They could be a noisy star or – it’s really hoped – an artificial signal such as a broadcast from an alien race. ®

SETI searchers: We still haven't found what we're looking for

Settle, SETI-fans: One radio spike does not a civilisation make

Radio? Just because we like it doesn't mean ET phones home

Look where the lookers are looking at you, rather than at BEELLIONS of galaxies

ATTENTION SETI scientists! It's TOO LATE: ALIENS will ATTACK in 2049

SETI boffins have forgotten the Bebo Incident of 2008