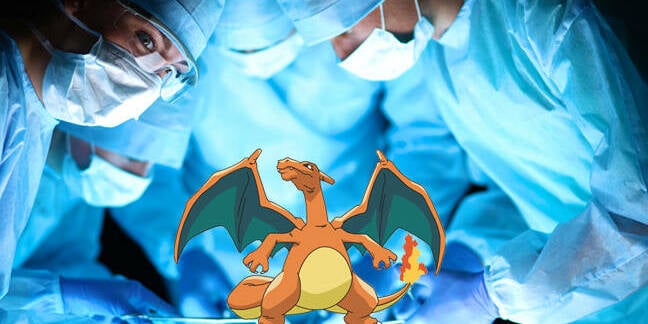 An American hospital is behind one of 72 complaints lodged with a US watchdog over Pokémon Go – the game in which people with nothing better to do with their lives try to track down virtual animals using smartphones.

“We are a small hospital in Oregon and Nintendo Pokemon Go players are descending on our halls and asking to go into private areas to take pictures and get their game points," states one of the gripes, obtained via a Freedom of Information request to the US Federal Trade Commission (FTC).

The Oregonian hospital complaint continues: "In the process, they may see our patients in rooms and halls. Our hospital works to carefully protect patient privacy and is in a dilemma, protect privacy versus public service. We ask that Nintendo NOT allow hospitals or clinics to listed as sites where anyone may locate a Pokemon target."

Which would seem like a reasonable request: no one wants to be in bed recovering from an illness or surgery and have some nerd wander in looking for a Squirtle so he can briefly fill a hole in his meaningless, empty life.

This is, however, very far from the first time that the game has led people into unsuitable areas.

Back in July, the Australian Department of Justice warned that it was going to start arresting people wo wandered into its courts looking for the brightly colored made-up digital nonsenses. It posted on Facebook in all caps: "GOING TO COURT IS NOT A GAME: POKEMON GO TRAINERS SHOULD LOOK ELSEWHERE FOR DIGITAL CRITTERS" and threatened them with an AU$22,000 (US$16,800, £12,900) fine and/or up to a year in jail.

Is Geiger one of them?

More worrying – or not, depending on how you look at things – the Japanese Tokyo Electric Power Co warned that players were stumbling into the Fukushima Nuclear Exclusion Zone and risking their health because, you know, Charizard [you seem to know a lot about these Pokemon – ed.].

The exclusion zone is so big it cannot be enclosed so the authorities asked the company behind the game, Niantic, to simply exclude the area around three of its nuclear stations. Depressingly, the power company was also asked, but refused to say, which Pokemon had been seen in which radioactive location.

A number of the other FTC complaints also highlight kids wandering into unsuitable places, particularly roads. Without looking.

But most of the remaining 71 complaints to the FTC were from angry gamers complaining that they had been ripped off when Niantic killed third-party app access and even blocked some accounts.

One poor soul wrote that he had spent $450 on the game – money that, let's be honest, would have been better spent doing literally anything else – only to have his account shut down.

"I had my account taken away from me without any warning or contact from Niantic," complained the fool, who then make clear he had singularly failed to learn the correct lesson. "I would like to have all my money that I spent on their game refunded or my account returned to me so I can continue to play their game."

The FTC said it could not confirm or comment on potential or pending enforcement investigations. But it did let out a huge sigh and walked off shaking its head muttering "I don't know, what can you do." ®