Weather, 1: electricity infrastructure hackers, 0. And let's not even start on the 'wind farms broke the world' theory 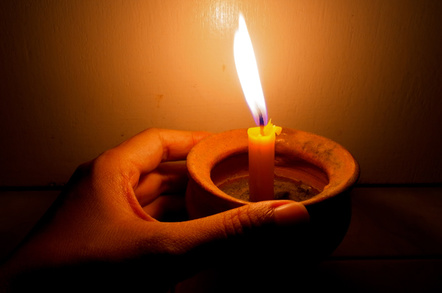 An “unprecedented” storm in South Australia blacked out the entire state yesterday, and the Bureau of Meteorology (BoM) is warning another low pressure system will cross the state today.

The attack by the Syrian Electronic Army's weather control unit – no, that's not right – the storm took down high-voltage power infrastructure. State premier Jay Weatherill said at least 22 transmission towers were knocked over.

Among the infrastructure physically damaged was th state's electricity interconnects to Victoria (and thence to the eastern states' grid). At the same time, some of the 80,000 lightning strikes that went with the storm knocked out a major generator.

With the network's frequency unstable, SA Power Networks shut off the entire grid to protect generators and transmission infrastructure from further damage.

This makes restoration a slow process: not only does SA Power Networks have to repair downed power lines, each new power source needs to be reconnected and given time to equalise transmission frequency before the next is restored.

As a result, while most of the State capital of Adelaide has been reconnected, rural areas remain offline. SA Power Networks told the Australian Broadcasting Corporation the Mid North and Eyre Peninsula will suffer an extended outage.

The power authority's Paul Roberts asked people to avoid using their mobile phones, which was an unnecessary warning since Telstra, Optus and Vodafone all suffered network outages.

The link from Nukscope to Hostexpress went dark from about 3pm to 10pm.

This Amcom link shows that even if a network stayed up, customer and peer traffic fell in a hole.

As far as The Register is aware, major data centres' diesel generators outlasted the blackout. ®