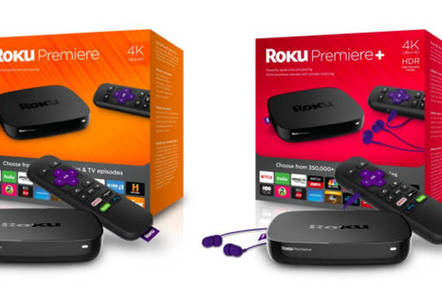 Roku has updated and expanded its line of streaming media boxes to cover both ends of the market.

In what would be the Roku 5, the company has moved away from numbers toward names and brought out five models that range from $30 to $130 in a bid to cover the entire market.

The lowest end Roku Express costs just $29.99 making it the cheapest on the market, undercutting Amazon's $40 Fire TV Stick and Google's $35 Chromecast. For that you get what used to be the highest-end media player just two years ago, with HD video and enough processing power to provide a full home entertainment system.

The next step up is the Express+ which costs $39.99, has a more powerful processor and works with older TVs. Then you get the equivalent of Roku's current top player – the Roku 4 – but now called Roku Premiere. It offers 4K video output over a WiFi connection for $79.99.

The Premiere+ is the same price as Amazon's top-end Fire TV at $99.99 but comes with support for the latest TV technology – HDR or High Dynamic range – which provides for richer colors, brighter whites and deeper blacks i.e. a nicer looking picture. And an Ethernet slot.

And finally the Roku Ultra is $129.99 – which is still cheaper than Apple's new TV products at $149 and $199 – and offers voice search and a digital audio output for modern systems. The company also has the Roku Stick at $49.99 which is designed to be portable.

Roku has taken an interesting approach of expanding its range to cover the whole market rather than keep product lines down to a minimum and go high or low end.

The addition of HDR is nice as are one or two other minor feature additions such as "night listening mode" which brings the volume of speech and special effects closer together so you don't fret about waking people up while being able to hear what people are actually saying.

The Roku line is also the best out there for sheer range of content because it is neutral, unlike Apple and Amazon which refuse to allow competitors on their platforms. And its specs are the same or better than everyone else.

Where the Roku falls down is where it isn't leaping ahead: where is 3D support? And its operating system needs a refresh.

Whereas Apple has done its Apple thing and worked on beautiful design and a seamless hardware and software connection, the Roku is starting to look a little clunky.

In short, this new line should maintain its position in the market, preventing it from being undercut at the low-end and offering enough at the high-end to stop all by the Apple fanbois pay a premium for a nicer looking Apple TV. It's solid, it's smart. But it's not a leap forward.

The new Roku are available to pre-order now and will ship on October 7. ®

Amazon says no to Apple TV