Our Windows windows will be resizable, soooon, vows Microsoft 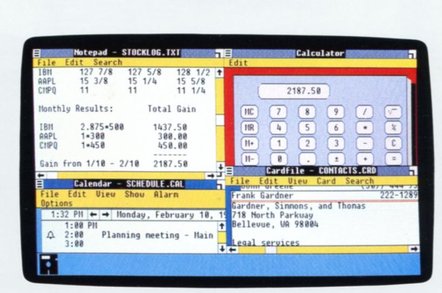 Wait, what? Actually, we made the second part of that up - he didn’t say that at all. But since the first part is true, you might be forgiven for thinking you’ve slipped through a wormhole in time back to 1986. Thirty years ago, Microsoft Windows didn’t support overlapping windows either.

The part of Windows that doesn’t have overlapping windows is Continuum, Microsoft’s your-Phone-as-a-PC feature – and as we found out when we tried to use Continuum to do some real work last month, the crude windows management is a dealbreaker. Apps must run full screen. (tl;dr: This isn’t the biggest dealbreaker – that’s the dearth of apps)

Microsoft was shedding light on its mobile plans at its Ignite conference this week, and even gave a clear mobile roadmap. Although you might have missed the news, since the event’s emphasis was so heavily geared around promoting bots, and other fatuous “AI” gimmickry.

In a panel, Microsoft promised that second screen Continuum apps would run in “resizeable” windows in the “Redstone 2” release due in the first half of 2017. (Microsoft said April.) The platform update would also allow Continuum users to set up a start menu for desktop mode, and unlock the second screen using proximity deduction, without manual intervention. Apple already uses something very like this to unlock its Watch, using the Wi-Fi signal strength to judge whether you are very close to a host machine or on the other side of the office. Microsoft calls its version “Proximity Connection”.

Other features expected in Redstone 2 useful for enterprises include bulk updates for USB and other management features.

It seems like a distant dream – but one day, everyone will be working just like this. (From Microsoft's Windows 1.0 ads, c.1986)

When Windows 1.0 appeared on the shelves at the start of 1986, it only supported tiled or full-screen windows. Overlapping Windows only appeared in Windows 2.0 in 1988, and prompted the famous “look and feel” lawsuit from Apple.

But Microsoft had outwitted Apple in the original contract for Windows 1.0, taking elements out of copyright protection, and the case ultimately failed because many of the designs Apple claimed to have invented weren’t actually invented by Apple, but by Xerox and others.

More details on the mobile roadmap here and here. ®