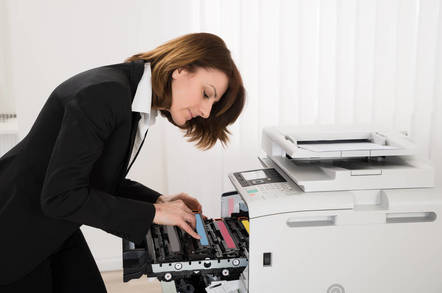 HP Inc is trying to spin its way out of the mess it created when it decided it would be a fantastic idea to brick unofficial and refilled printer cartridges.

Jon Flaxman, COO of the printers'n'PCs chunk of the former Hewlett Packard, confirmed on Wednesday his company really did in fact issue a firmware update in March that was programmed to disable cartridges made by third-party suppliers from September 13 onwards. Once installed on a printer, the new code lay in wait like a ticking time bomb, set to knock out non-HP cartridges later in the year.

The update was installed by people oblivious to its hidden purpose: to force folks into buying expensive HP Inc ink.

"We updated a cartridge authentication procedure in select models of HP office inkjet printers to ensure the best consumer experience and protect them from counterfeit and third-party ink cartridges that do not contain an original HP security chip and that infringe on our IP," Flaxman said in a statement.

The update, which has irked many customers and resellers who are now left with useless printer cartridges, instructs the printers to check the chips embedded in the cartridges and, if the chip is not properly verified, reject the reservoir.

Critics of the move have argued that the printer firmware update, which can be reversed by installing a pre-March version, unfairly restricts the rights of users and resellers to offer refilled and third-party cartridges rather than be locked in to HP's more expensive branded ink.

Flaxman acknowledges that the update has caused some previously functional and otherwise fine cartridges to be rendered useless, but claims HP also has a right to protect its brand from infringement.

"We will continue to use security features to protect the quality of our customer experience, maintain the integrity of our printing systems, and protect our IP including authentication methods that may prevent some third-party supplies from working," Flaxman argues.

Rather, the HP Ink COO places the blame on the company's handling of the rollout, suggesting it should have given customers and resellers more warning before issuing the firmware update.

"We should have done a better job of communicating about the authentication procedure to customers, and we apologize," he said. "Although only a small number of customers have been affected, one customer who has a poor experience is one too many."

Crucially, a fix is promised to reverse the damage. According to Flaxman:

As a remedy for the small number of affected customers, we will issue an optional firmware update that will remove the dynamic security feature. We expect the update to be ready within two weeks and will provide details here.

Alternatively, you can vent your anger at print-hpi@hp.com. ®