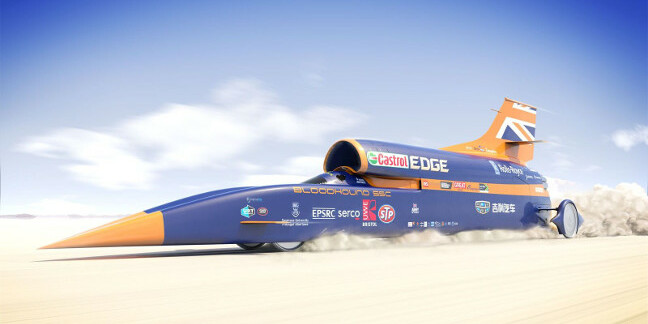 One of China’s largest car makers, the Zhejiang Geely Holding Group, is now the main sponsor for Blighty’s attempt on the land speed record: the 1,000mph Bloodhound.

Geely is better known in the UK as the owner of Volvo and the London Taxi Company.

The value of the three year deal has not been confirmed but the companies claimed it is the largest in Bloodhound’s history and puts the project on track for a record attempt in 2017.

Bloodhound project director Richard Noble, who went all gooey in his statement, claimed:

“We could not have a better partner than Geely: not only are they an international technology company with tremendous vision and capability, they share our passion for innovation and education. Their support, both technical and financial, means we can now plan next year's record-breaking challenge with confidence.”

Li Shufu, Chairman, Zhejiang Geely Holding Group, responded with a verbal massage of his own:

“...working with Project Bloodhound will help further our mutual technology breakthrough to an international audience. It also means we can tell millions of young people, in China and around the world, about the opportunities presented by studying science, technology, engineering and mathematics.

Despite its engineering roots, Geely does seem to have been at the marketing department’s prosecco. How far the Bloodhound deal fulfils the company development strategy of: “overall following, partial surpassing, key breakthrough, talent pooling, cooperation and over taking” remains to be seen. But hopefully it will meet the company’s core value which we can all get behind: “happy life, Geely drive”.

Alongside its attempt to raise the world land speed record, Bloodhound has also run an education programme to get kids interested in STEM subjects, which will be rolled out across China with help from Geely. ®