No wonder we're being hit by Internet of Things botnets. Ever tried patching a Thing? 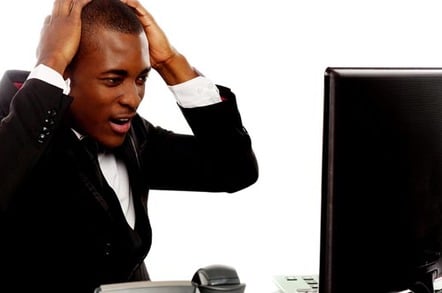 This man struggles to update his desktop. Imagine the poor sod coping with a smart fridge? Stock pic: Shutterstock

Internet of Things devices are starting to pose a real threat to security for the sensible part of the web, Akamai's chief security officer Andy Ellis has told The Register.

Speaking in the aftermath of the large DDoS against security journalist Brian Krebs, Ellis elaborated a little on the makeup of the botnet which took down Krebs' website, saying it was mostly made up of hacked Internet of Things devices.

“We've noticed a strong overlap between the attack … and one of the botnets that we have been working at in modelling,” Ellis told El Reg, as he named the Kaiten malware as one of the vectors involved in the Krebs attack.

Kaiten has long been known as a source of IRC-controlled DDoS attacks. While the original chiefly targeted routers, this latest version also “targets DVRs and some cameras” according to Ellis.

During the attack against Krebs, Akamai jettisoned him from their DDoS mitigation service with two hours' notice. Krebs was a pro bono customer and the sheer volume of traffic – 620Gbps – threatened to affect services for Akamai's paying clients. Krebs later said he didn't blame Akamai for taking the action they did, even though Google stepped in with its Project Shield service.

“This is a very concerning thing, looking at the prevalence of IoT and the ability for [the Krebs attackers] to throw around this volume of traffic,” Ellis said. “More research is being done on the adversary side to find out how to better take control of IoT devices, whether by means of a brute force attack using a known and common credential such as the [default] admin password, which gets them into a handful of routers out there, and then [the attackers start] leveraging the bandwidth of these end users.”

The chief problem for DDoS mitigation outfits trying to defend against IoT botnets is that with so many devices potentially falling under the control of miscreants, it is straightforward for the attacker's traffic to masquerade as legitimate web traffic.

“Compromised IoT devices … have the ability to source traffic from the same IP address as a legitimate user,” said Ellis, “which obviously gives the advantage that it stops [attackers] from being trivially filtered. I don't think I'm giving anything away when I say that when you're protecting a web server, any traffic coming in that's not related to web traffic is very deep and easy for you to drop. And the more that an adversary can look like a legitimate user, the more difficult it becomes, the more resources you have to expend to identify that that's an attacker and mitigating it.”

Part of the problem is the sheer difficulty of patching and updating IoT devices to take advantage of the latest vuln plugs.

Ellis said: “If you have an iPhone it auto updates in the background and you press OK and it takes care of it for you. We've become so used to that on the internet of general purpose computing devices that when we look at the Internet of Things – or as one of my colleagues likes to call it, Things on the Internet – there aren't devices built into that same robust infrastructure.”

Then he spelled out the painful upgrade process for most current IoT devices:

If I want to patch them, I need to go to the vendor website, hunt for my model of device, download an executable to my desktop and run it, when the executable will open a network hole and patch, upgrade the firmware on my device. You walk through that and to you and I that probably seems like, 'that's painful but at least I understood what it was I was doing'.

He also said that IoT devices ought to be “deployed in a fashion that makes them automatically udpate and keep themselves secure all the time.”

As for the Krebs hack, does the widespread use of an IoT botnet mean that the whole concept of IoT security is fatally flawed? Do we need to trash it all and start over?

“We don't know for certain that every machine involved in this was IoT; it's quite possible that the attacker spliced together a botnet including traditionally compromised servers as well as these IoT devices,” Ellis concluded. “Hopefully we'll learn more as we dig through the data.” ®