R2D2 delivery robots to scurry through the streets of San Francisco

Have the makers SEEN the rates of street crime here? 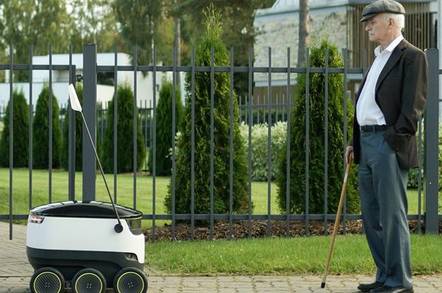 An Estonian robotics company is trialling six-wheeled delivery robots that can trundle through San Francisco delivering goods to the local population.

The robots are built by Starship Technologies, a company founded in 2014 by Skype cofounders Janus Friis and Ahti Heinla, and can trundle along at 6kph (3.7mph) delivering goods within a 4.8-km (3-mile) radius. The company wants to hire them out to businesses in the area and envisages them costing pennies to operate.

The robots, which bear a passing resemblance to the Star Wars droid R2D2, were originally developed as part of a NASA competition for hardware that could collect rock samples, but Starship then pivoted to bring the design up to spec for home delivery services.

They use nine cameras studded around the hull to avoid human traffic, and GPS and internally stored maps for navigation. While designed to be autonomous, the robots can also be controlled remotely via a smart phone app.

Starship hasn't said how much the robots will cost as yet; they're still in the trial stage of deployment. But The Reg hopes the robots are more sturdy than they look. With street crime the way it is these days in the cool, grey city of love, these droids are likely to get hijacked and cracked apart faster than a sea otter can open shellfish. ®