Jeremy Clarkson and Co. rise to top for Great British Bake Off replacements 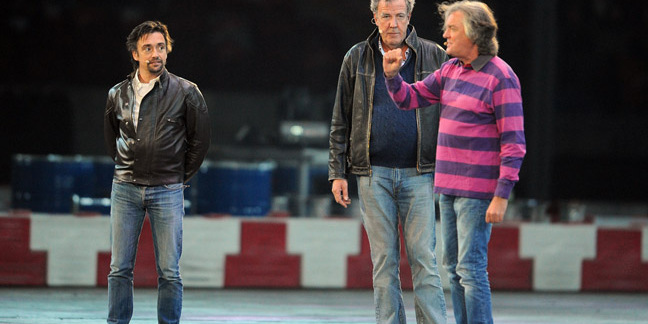 Two weeks after Channel 4’s £75m grab of Great British Bake Off from the BBC, the broadcaster has a big marquee but no filling.

Mary Berry has joined puckish Sue Perkins and Mel Giedroyc in electing to stay with the BBC, meaning three quarters of GBBO’s presenting line up evaporated.

It was Berry who mitigated the unvarnished Paul Hollywood but she was no soft option. Instead she is Great Britain’s archetypal nanny, a schoolmarmish teacher or matron.

Berry was a quintessential British authority figure that we seem to respond to so well in GB: expert, a bit standoffish – even when joking – and correcting you when you’d gone wrong but doing it ever so politely and with the deftest of touches.

But GBBO wasn’t a serious cooking program, otherwise why would it have a peak audience of 13 million?

For that you can thank the chemistry of Mel and Sue, the dynamic, disruptive and irreverent duo, cracking the saucy banter on batter, buns and Paul’s fairy cakes.

So, who to replace the jesters of the technical challenge? Jeremy Clarkson, that’s who – according to you – with either Richard Hammond or James May.

The former Top Gear line up topped our poll of who C4 should hire to replace Perkins and Giedroyc.

Swapping torque for tart, gears for glaze, and wheels for whirl would seem to be an obvious, and desirable, outcome for many of you.

Clarkson is, after all, no stranger to baked products: he knows a thing or two about bread – at least, when it comes wrapped around a cold filling.

Given one’s taste for beer and the other’s representation of a bloc that spans an array of bread-based products, their particular union certainly could throw up some interesting possiblities. Based on their political enmity, the duo would certainly make for some tasty TV, too.

Landing third was veteran Tory Eurosceptic MP Jacob William Rees-Mogg and his nanny, with whom Rees-Mogg once campaigned.

Rees-Mogg could certainly stir things up. He has claimed to be a man of the people, but the North East Somerset MP is not everybody’s cup of tea.

But that nanny of his, on the other hand: she has definite potential for Berry's now vacant role. ®