Forgive me, father, for I have used an ad-blocker on news websites...

77 per cent feel guilty about ad blocking. Do you? 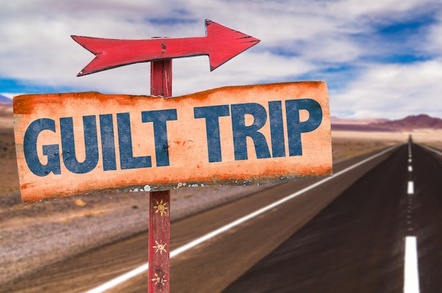 Guilt: Yes, even you lot feel it sometimes. Pic: Shutterstock

A survey of people using ad-blocking has mixed news for publishers. Thirty per cent of users deploying adblocking software were less inclined to visit websites that forced them to “whitelist” the site.

On the other hand, in reality many do whitelist one or two favourites. 77 per cent of adblock software users have whitelisted at least one site and almost two in five have whitelisted five; whitelisting could therefore lead to significant growth in traffic.

Content-farm Forbes and Google’s video channel YouTube are the two most-whitelisted sites. Forbes introduces a “hard” block while Google’s has none.

Publishers argue that they don’t mind adblocking readers – as these aren’t the kind of skinflint readers they want – but life isn’t so simple. They may not be the kind of readers they want to tell advertisers about, but in the absence of other revenue streams, headline traffic numbers still matter. The fact that users are prepared to punch holes in their own blocks is likely to keep publishers interrupting the user experience with guilt-inducing nags.

Why? The guilt is real. The survey – admittedly using a dubiously small sample size of 243 users for Gladly – finds 77 per cent of ad-blocking users suffer moral pangs for blocking advertisements. These are no doubt small moral pangs – “micropangs”, or “nanopangs”, perhaps.

Thirty per cent expressed anger that they couldn’t reach the content they wanted because of anti-blocking blocks.

We are left wondering why publishers, rather than diversifying their revenue, keep insisting on making the user experience as crappy as possible: first with ill-designed and distracting ads, secondly with jarring reminders that they need to see those ill-designed distracting ads. ®

This arms race will never end

Adblock+ has cake, eats it

Yes, battening off those who batten off content producers ... good business

Adblock denies Google has found a way to block Adblock