‘You’d swear a horse did it,’ says appalled retailer 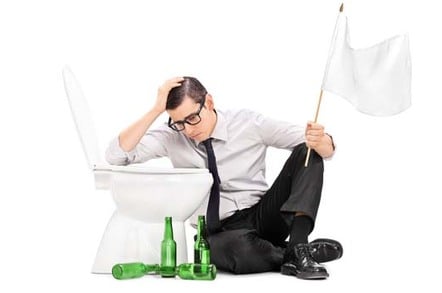 A desperate Dublin shopkeeper has placed a toilet and a pile of his very competitvely priced bog roll on the pavement outside his shop after a series of visits from a loose boweled night owl.

Alan Buckley was forced to install the curb-side crapper outside his Clever Buys outlet in Finglas, because “someone keeps coming up and shitting outside the shop” as he told the Irish Independent.

The appalled retailer said the man, apparently in his late 30s, “pulls up in the middle of the night, does his business and then drives off.”

Buckley said there had been at least two visits from the late-night log leaver this month - both of which were captured on CCTV.

“The first one was just horrible, the smell and all. You’d swear a horse did it.”

Buckley said the impudent pavement purger’s second visit lasted for three quarters of an hour, leading him to speculate that “sh*tting in the street isn’t his only problem.”

The small hours sojourns of the shop front stool secreter have even forced Buckley to rearrange his mealtimes: ”You’d want to have your breakfast before you come in because you’ll not eat again after looking at it.”

However, the plucky businessman has proved that where’s there’s muck there’s brass, by placing the presumably disconnected lav and a handy pile of toilet paper outside his premises, should the phantom pooper strike again.

“We have the cheapest toilet roll in town,” said Buckley, calling to mind the old retail adage: Pile it high, sell it cheap, and don't forget to flush. ®