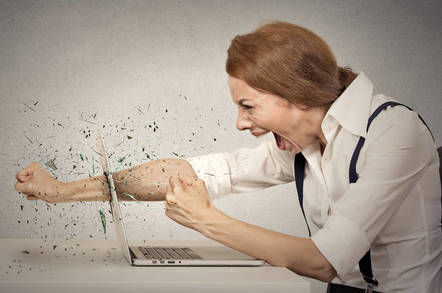 A punch to the gut for Microsoft? Pic: Shutterstock

Microsoft has been given a roasting by consumer group Which? over Windows 10 woes reported by users, with the organisation calling for compensation for those who found their PCs bricked after auto-updates.

Which? said that it had surveyed its members for their experiences with the latest version of Windows, which was released just over a year ago.

The results make for interesting reading, with 12 per cent of those who installed Windows 10 reporting that they actually reverted back to their previous version of Windows, and half of those saying it was because the upgrade adversely affected their PC.

It appears that not all is well with Windows 10, despite platitudes from the Beast of Redmond about the new platform being the greatest version of Windows ever, and claims about the growing number of users that have installed the new software.

“The Windows 10 upgrade is a choice designed to help people take advantage of the most secure, and most productive version of Windows. With more than 350 million monthly active devices now running Windows 10, the vast majority of customers who have upgraded to Windows 10 over the past year have had a seamless, positive experience,” said an unnamed Microsoft spokesperson in response to the Which? report.

However, it appears many of those users didn’t actually choose to install Windows 10, as the Which? report found, and many Reg readers can no doubt confirm.

“Many have complained about being ‘nagged’ by Microsoft alerts to install the new update and, despite declining notifications to install the software, they told Which? Windows 10 installed itself anyway,” according to Which?

Microsoft has previously denied that Windows 10 installs itself without permission, claiming that the installer offers the choice of accepting or declining the upgrade. Nevertheless, the firm has been aggressively pushing the new code during the year-long free upgrade period, making it a recommended download on Windows Update rather than an optional one, for example – before finally canning it in a blaze of almost no publicity at all.

After installation, many users also ran into problems with existing devices and software, with instances of printers and Wi-Fi no longer working as before, and some users reporting lost files and email accounts no longer syncing. Most damning of all, some said their computer encountered “such problems that they had to pay someone to repair it”.

While teething problems may be expected with new software, Which? reported that many customers were given short shrift by Microsoft when they contacted the company about problems they were having. It called on the hapless firm to improve its customer service and also compensate customers where appropriate.

“We rely heavily on our computers to carry out daily activities so, when they stop working, it is frustrating and stressful. Many people are having issues with Windows 10 and we believe Microsoft should be doing more to fix the problem,” said Alex Neill, director of campaigns and policy for Which?

In June, Microsoft was ordered to pay $10,000 to a woman in California after a court case over the Windows 10 upgrade borking her PC. It looks like Redmond had best brace itself for more of the same. ®