HPE asset disposals exercise - to possibly prep for an acquisition? 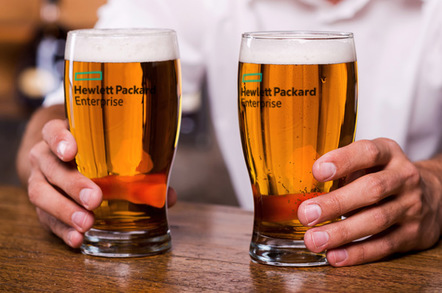 A fizzing HPE brew gets rid of unwanted froth

Comment On the day the Dell/EMC acquisition/merger completed, HPE announced it was selling off a load of non-core software assets in a “spin-off” merger with UK’s Micro Focus.

HPE gets $2.5bn in cash and HPE shareholders will have a 50.1 per cent ownership of the new entity, which will continue to be called Micro Focus. In addition SUSE Linux will become HPE’s Linux distribution of choice for use in their own private cloud solutions.

This latest spin-out/merger is one of a number of dramatic changes that has taken place with HP over the last two years. First the company split into two, with HPE taking the enterprise business and HP Inc the printing business. In May this year, HPE merged its services business with CSC in a deal that was worth a similar amount to today’s announcement.

Effectively Meg Whitman is unravelling some of the bad decisions of the last few years, including the purchase of Autonomy and acquisition of EDS in 2008. There’s more focus on delivering infrastructure to clients, rather than moving revenue to services – remember HPE’s public cloud offering was also culled at the beginning of 2016.

What’s interesting about this news is the parallel with Dell Inc (now Dell Technologies) and the focus on infrastructure. Dell’s services arm was sold off to NTT in March 2016, presumably to raise cash for closing the EMC acquisition, but also as part of a plan to focus on the core business of selling infrastructure. Some software assets were also sold off in June 2016 to private equity companies.

For both companies, the recent acquisitions and sales show an intention to get into shape for the upcoming fight in selling infrastructure to the Enterprise. What’s interesting to see is that neither company has completely divested in their non-hardware assets – Dell gains VMware, Virtustream and Pivotal, either as separate companies or as part/full owner.

HPE is remaining part of the CSC and Micro Focus businesses by having a shareholding in the new organisations. It’s fascinating to think what this might mean going forward. It’s like neither business wants to fully commit to where future revenue for their business may lie. I say this because I can only assume that infrastructure sales will become a dwindling business as companies move to public cloud; it doesn’t seem to be enough that infrastructure alone will keep businesses buying on-site solutions.

The battle lines are certainly being drawn between HPE and Dell. The Dell-EMC merger is only at the very beginning of what will be a long road to bring multiple companies towards one strategic direction – that of Dell Inc. There is product overlap to address, potential redundancies as at least the admin organisations of both companies are rationalised. There are decisions to be made about where to focus R&D. Most of all there’s the unsaid question of how Dell will deal with those software/services assets. Will they simply be brought in house over time and become divisions rather than separate companies?

For HPE, the focus is on infrastructure, with recent sales perhaps putting some money in the war chest for acquisitions. Who could be in the firing line? Nutanix, SimpliVity? Could it be bold and acquire someone like Docker or CoreOS?

I have to say that I don’t know the answer and I doubt anyone does, however it’s going to be fun watching. ®