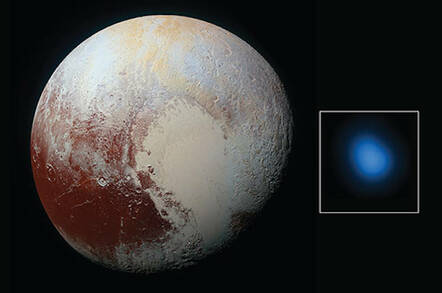 Not to scale: NASA's image of Pluto, in the visible spectrum and what Chandra saw

The Chandra space telescope has spotted X-rays emanating from Pluto.

That's “cold, dead, former planet Pluto with no magnetic field”, to most of us: orbiting between 4.4 billion km and 7.4 billion km from the sun out in the Kuiper belt, with no way to generate heat. That Pluto.

Since we don't suppose the former-planet got chemtrail drops during the New Horizons flyby in 2015, some other process has to be at work.

Chandra made four observations of Pluto before and during New Horizons' flyby, in case comparing its measurements to science from New Horizons gave them something to chew over.

The mission scientists are now chewing like crazy. As Johns Hopkins astrophysicist Carey Lisse, who led the Chandra team, put it: “Pluto is interacting with the solar wind in an unexpected and energetic fashion”.

Lisse, who also holds the laurel for discovering X-rays emanating from comets, says the solar wind's charged particles are probably the source of the necessary energy.

However, as NASA says in this media release, there's somewhat more X-ray activity than scientists expected.

“Although Pluto is releasing enough gas from its atmosphere to make the observed X-rays, in simple models for the intensity of the solar wind at the distance of Pluto, there isn't enough solar wind flowing directly at Pluto to make them,” the statement says.

The boffins are just as excited to find that the measurements from Chandra and from New Horizons don't quite match.

Data from New Horizons' Solar Wind Around Pluto (SWAP) instrument suggests the planet's atmosphere (such as it is) has a “very mild” bowshock where it encounters the solar wind; with a small wake behind.

The scientists – including SWAP team investigators David McComas from Princeton and Heather Elliott from the Southwest Research Institute – are now pondering options including a bigger tail of gases trailing the planet than SWAP detected; that interplanetary magnetic fields happen to be focussing the solar wind onto Pluto; or the solar wind's low density allows a torus of neutral gas to form around Pluto's orbit.

Their work has been published at the journal Icarus, here. ®