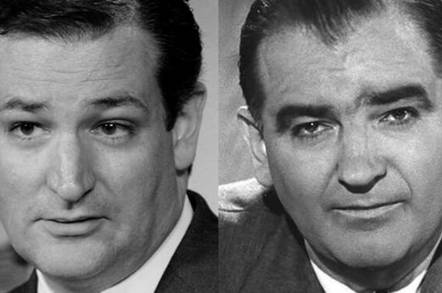 With echoes of the notorious hearings run by Senator Joseph McCarthy in the 1950s, Wednesday saw Senator Ted Cruz cajole, misrepresent and then outright threaten witnesses to a hearing he called over the important change to the internet's functioning.

The hearing titled Protecting Internet Freedom: Implications of Ending U.S. Oversight of the Internet was billed as a way to double-check on the US government's plan to let internet organization ICANN take over the critical IANA contract at the end of this month.

It quickly became a showcase for Senator Cruz's particular brand of inquiry. In the most striking exchange, the senator actively threatened assistant commerce secretary Larry Strickling and staff at the Department of Commerce (DoC) with jail time and the end of their careers for not following what he perceived to be Congress' intent.

With aides holding up a series of boards with various texts printed on them – language that remained illegible to witnesses sitting more than ten feet away – Cruz said that Strickling and his staff faced "personal criminal liability of up to two years in prison" for doing preparatory work on the IANA transition in the past 12 months.

"This administration is not going to prosecute it, but in January a new administration will be in Washington ... and we will conduct a thorough review," he added. He went on to "advise" DoC staff that "your superiors do not have the authority to tell you to violate federal law," and that they were "on notice."

Strickling, who was already in an uncharacteristically combative mood, was unsurprisingly not happy at having himself and his staff threatened by Cruz, and stood his ground. "I am outraged that you would accuse us of doing that," he told the hearing, before pointing out that he was under no doubt that no one at the DoC has broken any federal law, and that the preparatory work that his department had carried out was in response to specific requests from Congress.

The difference? Cruz had a big hand in drafting the financial bill riders that prohibited the US government from using funds to carry out the IANA transition, but did not draft any of the language that saw Congress approve the process in the first place.

At the heart of his threats is an uncertainty that even if Cruz manages to persuade his colleagues to insert a new rider to prohibit the IANA transition, that the DoC will be able to effect the change regardless.

A letter issued by the Government Accountability Office this week appeared to say that the DoC could use leftover budget funds on October 1 to make the change. All that would have to happen is for President Obama to refuse to accept the "continuing resolution" to continue funding the US government for one day.

However, this will not be an issue, with Strickling making it plain at the hearing that the DoC will not take that course. "We will follow your direction," he told the Senate subcommittee, "if that is what we are told to do." He also said that the DoC has put in place plans to enable it to extend the current contract "as late as the night of September 30."

With that uncertainty out of the way, it says something of Cruz's character that he subsequently decided to use his position as subcommittee chair to threaten Strickling and his staff with the loss of their careers.

A battle lost on logic

This was not the only point on which Cruz pushed heavily and was met with frustrated and at times aggressive responses from his witnesses and Congressional colleagues.

Cruz repeatedly referenced the First Amendment, arguing that if the IANA contract was moved away from US government control, it would cease to be applied across the internet. The argument was a strawman that Strickling and ICANN CEO Göran Marby were repeatedly forced to argue against.

Strickling repeatedly pointed out that Cruz was conflating two entirely different things, and that the IANA contract presented no opportunity for either free speech or censorship. Marby confirmed as much again, with Committee member Senator Christopher Coons (D-DE) repeatedly pulling the hearing back to the realities of what was being discussed. But Cruz simply plowed on regardless.

In one of the most ridiculous exchanges, Cruz repeatedly pressed Marby to say that China was "the enemy of the internet." Marby refrained from having the words put in his mouth, his long history in the Swedish civil service serving him well. Cruz then tried to force Marby to talk about what his predecessor at ICANN, Fadi Chehade, meant when he said various things in the past – the words again displayed in huge display boards held up by Cruz's aides. Marby refused to be sucked in.

And lastly, Cruz hammered on about how the proposed change would give greater power to Russia, China, Iran and other authoritarian governments. Despite repeated specific explanations for why that wasn't true, both by Strickling and witnesses in a second panel held immediately after, Cruz still closed the hearing by stating: "Most troubling in this hearing was when we heard indisputable evidence that the transition would increase the power of all governments except the United States."

Just as Senator Joseph McCarthy had no trouble making reckless accusations in the face of reasoned testimony, and threatened anyone who questioned his wrongheaded view of what was happening, so Senator Ted Cruz has no problem with pursuing his own personal crusade despite its obvious factual flaws.

If nothing else, Cruz's Senate colleagues should refuse a financial rider to prevent the IANA transition to send a clear message that this kind of groundless bullying and abuse of the democratic process should have no place in the United States Senate. ®