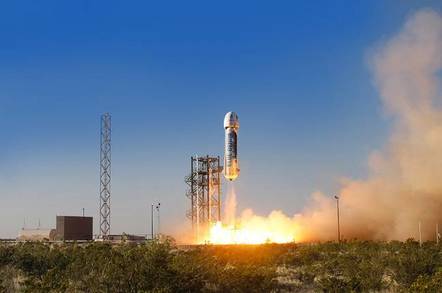 The “New Glenn” rocket is named in honour of first United States astronaut to orbit the Earth, John Glenn.

Which leaves us with Elon Musk being able to tell Jeff Bezos that size doesn't matter, it's what you do with it that counts.

Billionaire biology aside, the New Glenn looks a very handy vehicle indeed. It will pack seven of Blue Origin's BE-4 engines in the first stage, all burning liquefied natural gas and liquid oxygen. The second stage will include the same engine in a form designed for use in vacuum. A planned three-stage New Glenn variant will pack a BE-3 engine (currently used to power Blue Origin's sub-orbital New Shepard vehicle) running liquefied hydrogen and liquid oxygen. The first stage will be reusable and looks like it will try to mimic SpaceX's vertical landing trick, perhaps even on an offshore barge.

Bezos has revealed the rockets' thrust, but not their weight. So it's hard to say exactly how high they'll be able to go or the payloads they can carry. It would be very surprising indeed if they can't reach geostationary orbit. The three-stage variant looks to have the potential to go rather further.

Blue Origin says it hopes New Glenn will fly before 2020. That's rather later than the Falcon Heavy, but still a very welcome addition to humanity's heavy lift capabilities as we consider further adventures in orbit, and well beyond. ®