Microsoft thinks time crystals may be viable after all

Movement without energy? Redmond puts its money where its mouth is 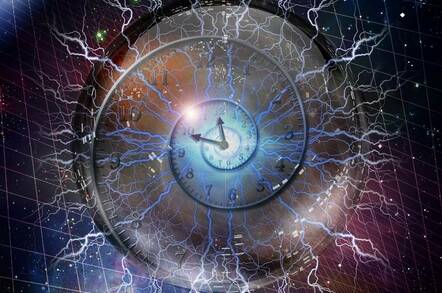 Microsoft researchers have teamed up with physicists from the University of California, Santa Barbara, to show how time crystals might be possible.

Crystals have a rigid arrangement of atoms that break translational symmetry. Their structure is not symmetrical in space, unlike a sphere, which looks the same from all directions.

Time crystals break the symmetry of space and time. Wilczek considered a group of atoms in their ground state moving in perpetual circular motion, which is considered an impossible idea because ground states do not have enough energy to spontaneously move.

Dominic Else, co-author of the paper, published in Physical Review Letters and a physicist at UCSB, said that there was a “crucial difference” between explicit and spontaneous symmetry breaking.

The team of researchers have many rules for their hypothetical quantum time crystal systems, known as “Floquet-many-body-localized driven systems".

The Floquet time crystals must never reach thermal equilibrium and radiate heat or they would lose rotational energy. When the size of the system grows, the time it takes for TTS to decay into a time-translational independent state is infinite, so TTS is broken forever without violating the second law of thermodynamics.

"The significance of our work is two-fold: on one hand, it demonstrates that time-translation symmetry is not immune to being spontaneously broken," said co-author Bela Bauer, a researcher at Microsoft Station Q.

But, no one has ever observed the breaking of TTS.

The researchers believe they can demonstrate this elusive property by using oscillating trapped ions or superconducting qubits to represent a floquet time crystal. The experiment would observe how the system evolves over time to see whether TTS broke spontaneously. ®