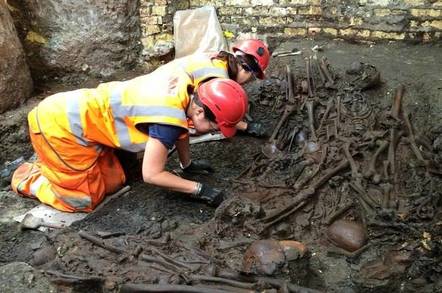 Scientists have revealed Yersinia pestis as the bacteria that caused London's 1665 Great Plague.

The findings were made from studies of DNA from some of the 3,500 bodies in a mass grave burial pit uncovered at an excavation site at the Liverpool Street Crossrail site.

Testing at labs in Germany revealed DNA of Yersinia pestis caused the bubonic plague, ending centuries of speculation about the pathogen responsible for killing some 10,000 people in 18 months, or a quarter of London's population.

The bacteria were found in the teeth of five plague victims at the site and could help shed light on how the disease spread so rapidly, and whether it stemmed from a local outbreak or travelled from other parts of the world.

Full sequencing will build the evolutionary tree of the plague and could help determine links between the London Great Plague and the Black Death of 1348, which killed up to 200 million people and changed the course of European history.

Boffins from the Museum of London Archaeology sent 20 samples to team leader Kirsten Bos and PhD candidate Maria Spyrou of the Max Planck Institute in Germany who then studied the teeth of a child up to 11 years old, and four adults under the age of 25.

Further tests will reveal if the individuals were natives or visitors. It should also be possible to figure out what the victims ate before their demise.

"This result shows that these five individuals were exposed to plague shortly before their deaths and owing to the disease’s virulence, it is likely that they died of this exposure. This is the first identification of plague DNA from 17th Century Britain," the Museum of London Archaeology said in a briefing note.

Samples found in a first run of tests to contain the pathogen were subject to shotgun sequencing, which analyses DNA without having to target any single microbe. ®