You're guilty but broke, judge tells Wash.io – the 'Uber of laundry'

Upstart is everything that's wrong with Silicon Valley 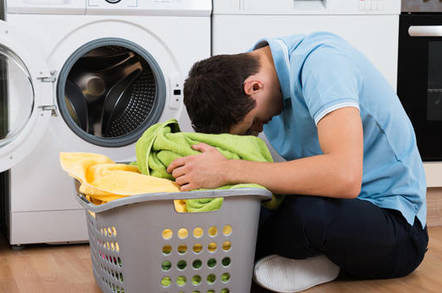 A judge in San Francisco has rejected a settlement between startup poster child Wash.io and angry former employees – because the company can't afford it.

Despite having received $16m in funding and at one point being valued at $60m, the so-called "Uber of laundry" is unable to pay the $450,000 it agreed to after being sued by the people who actually did the company's work.

"The financial condition of defendant appears precarious," said [PDF] Judge Curtis Karnow, "and must be newly evaluated in order to provide plaintiff's counsel, and myself, a basis to determine whether to continue with the approval of the current settlement."

The lawyer for the plaintiffs tried to argue that the judge should put the settlement amount into a trust to protect it – but Wash.io refused to agree and Judge Karnow said he couldn't force the company to do so. He asked the company to come back with evidence of its perilous finances.

The judge warned [PDF] of the "bleak financial situation" and "potential bankruptcy" of the company, and alluded to further litigation against the company on 24 August. A week later, Wash.io said after just three years that it was closing its doors. A subsequent order by the judge on September 2 said the agreed settlement assumed the "financial viability" of the company – something he could no longer assume.

"We generated millions in revenue and hundreds of thousands of orders, but the nature of startups is being innovative and venturing into uncharted territory: sometimes you make it, sometimes you don't," Wash.io's founders said in a post on its website announcing its failure. "We are proud of what we accomplished along the way: over one million items of clothing dry cleaned, and over 21,000 tons of laundry washed and folded!"

In reality of course, Wash.io did absolutely no washing or folding of laundry; it simply delivered the clothes to existing laundries. It didn't even pick up and return the clothes: for that task it paid "ninjas" to do the job. But it failed to pay them minimum wage or overtime, and did not provide meal and rest breaks as required by California law.

In much the same way that Uber tried to bypass labor laws, Wash.io claimed the ninjas were "independent contractors" in order to keep costs down to a minimum. That "disruptive" approach was illegal, sparking the lawsuit back in June 2015. Over 12 months, the former ninjas slowly reached a settlement but it was too late: the fundamentally flawed business burnt through its cash stockpile trying to make the impossible possible.

The company is the epitome of everything that is wrong with Silicon Valley: it's entire business model was built on serving others within the startup bubble – people who are willing to pay to not have to deal with their own dirty clothes. But it quickly found out that even lazy 20-somethings are not willing to pay that much for clean clothes.

Rather than use its money to figure out how to cut the biggest cost it faced – the actual laundries – Wash.io wasted millions building its app and marketing itself. Even though literally every order cost the company money, it deluded itself into believing that excited press coverage was as good as profit margin and investors putting in money – including celebrity VCs Ashton Kutcher and Nas – was proof of their value.

In the end, as with many other startups, the company never focused on how to make an actual profit, and ended up screwing the people who worked for it in order to provide a short-lived service to people who didn't really need or want it. Wash.io is now down the plughole. ®