Fujitsu's billion-dollar ARM supercomputer delayed by up to 2 years 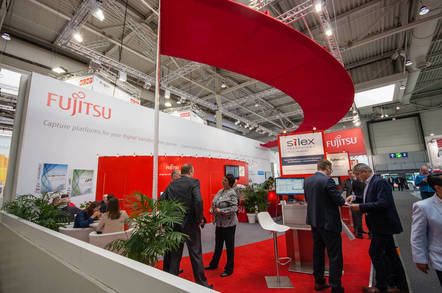 Back to the drawing board ... Fujitsu staff at CeBIT in Germany earlier this year (Photo: drserg / Shutterstock)

Fujitsu's monster ARM-powered supercomputer, the Post-K, will miss its 2020 deadline.

The $910m project has stalled because its engineers need more time to design, test and perfect the machine's processors, we can confirm.

Fujitsu was hired by Japan's boffinry nerve-center RIKEN to produce a roughly 1,000 peta-FLOPS supercomputer to supersede the nation's K Computer, which today is the fifth fastest known supercomputer.

When the Post-K emerges, and if it lives up to its near-exascale performance promise, it will be eight times faster than today's most powerful known supercomputer in the world, China's Sunway TaihuLight. The Post-K system will be used to model climate change, predict disasters, develop drugs and fuels, and run other scientific simulations.

Fujitsu, which built the K Computer predecessor using heavily customized SPARC64 VIIIfx chips, switched to the ARMv8-A architecture for its Post-K beast. However, The Register understands that the new supercomputer will be one to two years late, thus arriving in 2021 or 2022, which is kinda awkward because the Post-K's official name is Flagship 2020.

The delay may also take some of the shine off Tokyo-based Softbank's just-completed acquisition of ARM, the UK chip designers that licensed their 64-bit technology to Fujitsu for things like the Post-K beast. ARM and Fujitsu worked together to add large vector instructions to ARMv8, helping to bring the architecture up to scratch for supercomputer applications.

"There has been a delay to development due to us applying a new CPU related semiconductor technology. As a result, the time required for making system prototypes and detailed designs has now been extended," Fujitsu spokesman Rishad Marquardt told El Reg on Tuesday.

"Currently it is expected the delay will push back the operation start time by between 12 and 24 months."

Engineers working away on the Post-K were expected to put the finishing touches to their blueprints by early 2018, and fire up the completed system in the first quarter of 2020. Now that looks likely to happen up to a year or two after. Fujitsu would not comment on exactly what the problem is: whether it's that moving from SPARC64 to ARMv8 is proving trickier than expected, or that shrinking designs down to 10nm is becoming a real headache, or both.

The Post-K's ARM processors are likely to be 10nm FinFET chips fabricated by TSMC, and will feature high-bandwidth memory and the Tofu 6D interconnect mesh [PDF] that's used in the K Computer. It could be that getting decent yields of processors including all these bells and whistles is going to be harder than expected.

"We expect more exascale projects and more delays as the engineering challenges mount," said The Next Platform's Tim Prickett Morgan, who was first to report the Flagship 2020 delays after hearing from sources at RIKEN. The science organization was really hoping to beat America to powering up the first publicly known exascale supercomputer: the US government doesn't expect to do so until 2023.

"We also think that compromises will be made in the power consumption and thermals to get workable systems that do truly fantastic things with modeling and simulation," Prickett Morgan added.

Meanwhile, Fujitsu announced today it will build a 2,380-core x86-based computer system for the Institute for Cosmic Ray Research at the University of Tokyo. ®