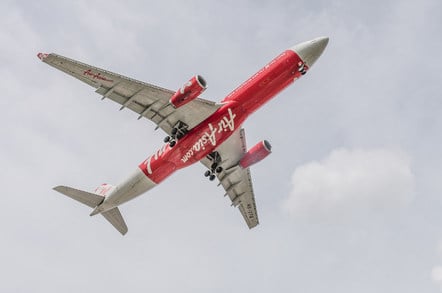 Finger trouble with onboard navigation systems led to an Air Asia flight making a two-hour internal hop in Australia before its scheduled journey to Malaysia.

An investigation report by the Australian Transportation Safety Bureau (ATSB) into the March flight disclosed the cockup, which it said was down to the A330's captain “inadvertently enter[ing] the wrong longitudinal position of the aircraft.”

He had copied down the aircraft's position co-ordinates from a sign displayed at the airport terminal gate while initialising the Airbus' systems. Instead of entering 15109.8 east (i.e. 151˚ 9.8' east), the captain entered 01519.8, resulting in “a positional error in excess of 11,000 km.”

“Flight data and analysis of the occurrence shows a data entry error occurred at this time,” said the ATSB.

An Airbus advisory software patch to the A330's Air Data and Inertial Reference System (ADIRS), designed, amongst other things, to reject manually-input position data if it disagreed with the aircraft's own GPS, had not been applied to the aircraft in the incident.

After the first officer rejoined the captain in the cockpit, having inspected the exterior of the airliner, both of them later said the aircraft's multi-purpose control and display unit (MCDU) showed that its primary source of location data was the GPS and that the accuracy of positioning was “high”.

The first officer did spot a “flag or indication” flash up on the captain's navigation display but it was “too quick to interpret”. Although a cockpit system began emitting occasional single chimes, which are an “aural alert often associated with an ECAM [electronic centralised aircraft monitoring] MASTER CAUTION message to indicate that the aircraft’s systems have detected a fault,” neither pilot checked the MCDU. The ECAM did not display an error status message so both flight deck crew assumed all was well.

All was indeed well until the takeoff run, when upon rotation, the ground proximity warning system started blaring “TERRAIN, TERRAIN” messages. As the aircraft was clearly not at risk of flying into the ground while lifting off from the runway, the pilots cancelled the alarm.

However, the A330 then banked left after takeoff, with its onboard heading indicators showing it on a course of 170˚, even though its actual magnetic course was 132˚. Air traffic controllers radioed the flight to ensure the pilots knew their permitted course – at which point the crew realised that their expected navigation information was not displaying on the instruments. In addition, an error display reading “GPS PRIMARY LOST” began showing. The crew resolved to effectively turn the navigation systems off and on again.

Thanks to an air traffic control transmission interrupting as the first officer attempted to reset the three navigation systems one by one, he accidentally wiped all information shown on the captain's primary flight display except for airspeed and vertical speed. The first officer's screen continued to display the Airbus' altitude, but with an incorrect heading. At this point the crew asked Sydney if they could turn around and land.

However, as cloud had closed in and the navigational displays were both inoperative, the A330 was unable to make an approach on instruments – and so they were diverted to Melbourne Airport, 390 miles away, which was free from cloud.

At Melbourne ground engineers carried out “extensive troubleshooting” but could find no faults. After three hours the A330 took off again for an “uneventful” 10½ hour flight to Kuala Lumpur.

“This occurrence highlights that even experienced flight crew are not immune from data entry errors. However, carrying out procedures and incorporating equipment upgrades recommended by aircraft manufacturers will assist in preventing or detecting such errors,” concluded the ATSB. The full report is here (PDF). ®

An Air Asia spokesman got in touch with El Reg to say:

AirAsia X would like to stress that we have in place robust management systems to monitor and prevent similar incidents from reoccurring.

We also wish to reiterate that we have regularly passed safety and security audits conducted by various international regulators, including the IATA Operational Safety Audit (IOSA). We remain committed to ensuring our compliance to all safety and security regulations.