It's time for humanity to embrace SEX ROBOTS. For, uh, science, of course 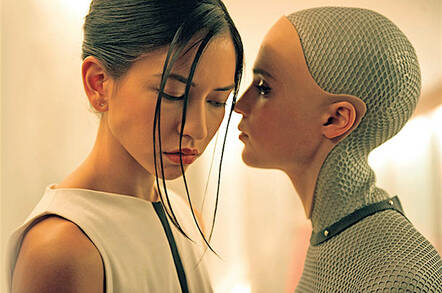 Humankind is still considering whether we could create sex robots – but should we, considering the ethical and legal questions arising from the creation of sex data and non-adult sex robots?

During August's extraordinarily warm and enjoyable Electromagnetic Field festival, Dr Kate Devlin, a researcher at Goldsmith's department of computing, took to a packed stage to ask whether it was time for humanity to — literally and figuratively — embrace love and sex with robots.

Last year The Register spoke to Dr Kathleen Richardson, who heads the Campaign Against Sex Robots (CASR), about her opposition to love machines and My Little Pony dolls. Dr Richardson told us that she believed the introduction of sex robots would increase what she described to us as the damage to society caused by prostitution .

Dr Devlin disagreed, telling The Register that CASR “rests on a parallel drawn between sex robots and female sex workers.”

CASR, Dr Devlin argued, is attempting to shut down the technology in its infancy. The group’s position paper states: “While males are the chief buyer of human sex, females are more likely to purchase artificial nonhuman substitutes such as vibrators that stimulate a discrete part of the body rather than purchase an adult or child for sex.”

“It’s quite a generalisation to conclude that because women buy discrete (and also discreet) sex toys that they would not be interested in a replica of a human. There’s no evidence to suggest this is in any way innate. There’s a huge amount of socialisation at play here,” said Devlin. "[CASR] claims that men using sex robots is similar to men buying sex: the reduction of women to a ‘thing’. That’s a much wider and very contentious debate.”

Dr Devlin saw sex robots “initially as an extension of sex toys-smarter sex toys that could use machine learning and biofeedback to provide an adaptive, personal fulfilling sexual experience. This might be for fun but could equally be for therapeutic reasons. There’s nothing to limit these robots to a particular form. In fact, when we’ve asked people what a sex robot might look like, we’ve had responses ranging from ‘they’d need to look like a human’ to ‘it shouldn’t have a face’.”

Sexbots could also provide valuable solutions to difficult therapeutic problems, and also offer exciting possibilities to all of us in an age when we are exploring sexuality and gender identity — as well as providing a fascinating area for robotics and AI research.

“There has already been work on using VR for therapy for sex - on the one hand, in helping people regain sexual confidence, and on the other, as part of treatment for sex offenders,” Dr Devlin told us. “Sex robots could take this out of the virtual realm and into the physical.”

The reproduction of human motivation within a computer system has long been a project for artificial intelligence researchers, and few human behaviours are as obviously goal-driven as sex. Thanks to IVF and similar medical advances, sexual intercourse is no longer necessary for procreation, and yet sex persists because of humanity’s mental processes, our focus on sex is a fundamental part of the human condition, and it’s unlikely that any AI could reproduce human processes unless it too was capable of sexual interest.

Dr Devlin said she believed it was “possible” to create a reproduction of human motivations without sexual desire, “but I’m not sure it is (pardon the pun) desirable. I think this is particularly interesting in terms of embodiment - the interaction of the body with its environment and how that influences the way we think and behave. The physical act of sex is a very clear example of embodiment. There are bodily interactions (and literal stimulation) firing off all kind of changes in the brain that have a clear bearing on our cognitive processes.”

Next page: Sex robots and machines for sex
Page:
Tips and corrections
133 Comments