What the hex is up with Jupiter's North Pole?

No Hexagon like on Saturn, but still the joy of six: half a dozen megabytes of Juno data took 62 hours to download 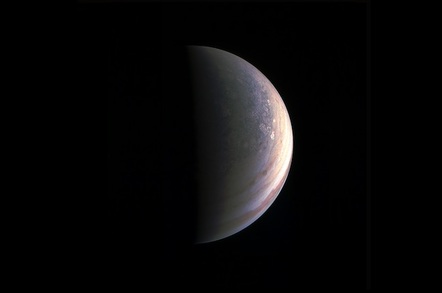 NASA's Juno spacecraft captured this view as it closed in on Jupiter's north pole, about two hours before closest approach on Aug. 27, 2016. Credits: NASA/JPL-Caltech/SwRI/MSSS

Jupiter doesn't have a colossal hexagon at its North Pole, unlike it celestial cousin Saturn.

So says NASA after the six megabytes of data the Juno probe collected last weekend finally made it to Earth after requiring a day-and-a-half to download. One of the downloads was the image at top, which those of you who want more detail or are reading on mobile devices can find here on NASA's site.

The image depicts Jupiter seen from about 78,000km, just a couple of hours before the Juno probe's closest encounter with the gas giant.

“It’s bluer in color up there than other parts of the planet, and there are a lot of storms,” said Scott Bolton, principal investigator of Juno from the Southwest Research Institute in San Antonio. “There is no sign of the latitudinal bands or zone and belts that we are used to - this image is hardly recognizable as Jupiter. We’re seeing signs that the clouds have shadows, possibly indicating that the clouds are at a higher altitude than other features.”

All of Juno's eight instruments were collecting data during the pass, with the Jovian Infrared Auroral Mapper (JIRAM) able to peer at Jupiter's poles in infrared. Alberto Adriani, JIRAM co-investigator from Istituto di Astrofisica e Planetologia Spaziali, said the data received so far revealed “warm and hot spots that have never been seen before.”

We also got to see Jupiter's aurorae, which are apparently “very bright and well-structured”.

These are humanity's first glimpses of Jupiter's polar regions, so we're seeing stuff that was expected and hoped-for. But, frankly, we've little idea what's going on down there.

NASA is still poring over the six megabytes it retrieved and Juno will make another 35 orbits of Jupiter. If all goes well, there'll be plenty more like this – and better – to come before the probe's planned obsolescence in January 2018. ®