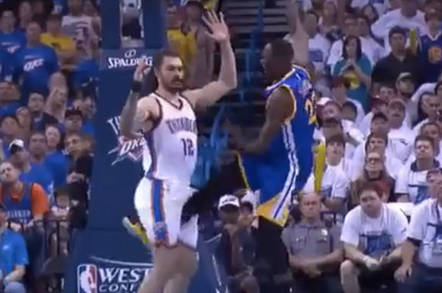 The Golden State Warriors have been sued by a bunch of fans who claim the basketball team's mobile app is eavesdropping on them.

The suit [PDF], filed with the Northern California District Court this week, alleges that the Android and iOS versions of the Golden State Warriors App can track and record audio from the handset's microphone without user notification or permission.

According to the complaint, the app, developed by Signal360, can potentially wirelessly detect so-called beacons in stores to work where you've been shopping, and can potentially use the handset's microphone to pick up signals within the audio of TV adverts, music and broadcasts that are inaudible to the human ear in order to serve them targeting advertisements.

The Golden State Warriors App bills itself as the "official" mobile app of the team, and offers team scores and statistics as well as news and video highlights.

While the app, offered through the Google Play Store and iOS App Store, does request permission to access hardware including camera, microphone, Wi-Fi location, Bluetooth, and device ID information, the suit complains that users are not told just how extensive the alleged audio recording of the software really is.

"The app turns on the microphone (listening in and recording) any time the app is running," the plaintiffs claim. "No matter if a consumer is actively using the app or if it is merely running in the background, the app is listening."

Thus, the plaintiffs claim, users are not given a clear enough understanding of when the app is recording them, and often have conversations recorded by their phones without notification or consent. The suit accuses both Signal360 and the Warriors basketball team of violating the Electronic Communications Privacy Act.

The complaint asks that the court award damages of up to $10,000 per class member. The complaint does not provide the exact number of people who could be eligible to claim damages, but says it would be in the "thousands."

The NBA is not named as a party in the suit. ®