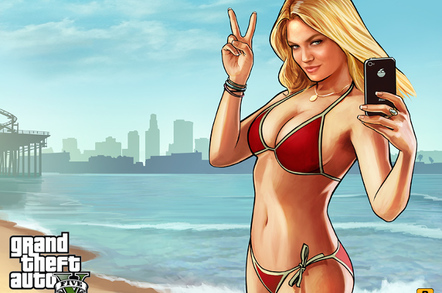 That definitely-not-Lohan promo cartoon, in full

Hellraiser Lindsay Lohan has had her case against Grand Theft Auto developers Rockstar Games, for allegedly basing a character on her image, thrown out by a New York court.

The actress claimed that her image was used as the basis of one of the game's characters, Lacey Jonas.

The Jonas character allowed players to rescue her from swarms of paparazzi and take her home and the cover art for the game featured a woman holding a mobile who, it was argued, looked remarkably like Lohan.

Lohan’s lawsuit, filed two years ago, said that the places and events in both characters’ storylines were “substantially similar” to her own life and there could be no doubt about who the game was sending up.

“It is unequivocal that the Plaintiff was the intended referent in the GTA V game by using her likenesses, portraits, and voice solely to advertise the game for trade purposes and by specifically announcing the Plaintiff’s name in the media as a 'Lindsay Lohan look-alike side mission' at least two months before the release of the game purely to promote, hype the game to attract sales of the defendants video game,” read the complaint.

However, the court threw out the case on Thursday.

The court ruled that because her name was never used, and the character doesn’t look exactly like her, Lohan had no case.

The ruling said: "This video game's unique story, characters, dialogue, and environment, combined with the player's ability to choose how to proceed in the game, render it a work of fiction and satire."

Take-Two Interactive, parent company of Rockstar Games, has itself not been averse to throwing the odd sueball.

Last year the biz took action against UK broadcasting company over allegations of trademark infringement for its decision to cast a biopic about the games developer's history.

Lohan is currently residing in the UK and in July accepted the challenge of turning on Kettering for Christmas to redeem herself for a tweet asking where the town was. ®