How about f**k off – is that adult enough? 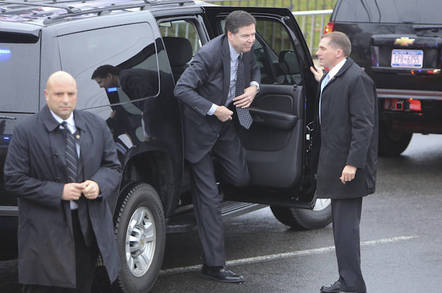 FBI Director James Comey is gathering evidence so that in 2017 America can have an "adult" conversation about breaking encryption to make crimefighters' lives easier.

Speaking at Tuesday's 2016 Symantec Government Symposium in Washington, Comey banged on about his obsession with strong cryptography causing criminals to "go dark" and making themselves harder to catch. Comey said that once the election cycle is over, he will be resuming his push to force technology companies to bork their own products, and this time armed with plenty of supporting documentation.

"The conversation we've been trying to have about this has dipped below public consciousness now, and that's fine. Because what we want to do is collect information this year so that next year we can have an adult conversation in this country," he said, AP reports.

"We want to lock some people up, so that we send a message that it's not a freebie to kick in the door, metaphorically, of an American company or private citizen and steal what matters to them. And if we can't lock people up, we want to call (them) out. We want to name and shame through indictments, or sanctions, or public relation campaigns – who is doing this and exactly what they're doing."

Americans do have the right to a measure of privacy in their own homes, cars, or on their electronic devices, he said. But the government also has the right to invade that privacy when law enforcement feels it has probable cause.

Comey referenced the Apple case, where the FBI tried to force Tim Cook's company to build a version of iOS that could bypass the security systems of an iPhone used by the San Bernardino terrorist. The FBI backed down after a third party proved able to get into the handset, and nothing of note was found on it.

But Comey isn't giving up in his quest to introduce a backdoor in encryption systems, or a front door as he prefers to call it. This despite the NSA and the best minds in the crypto business pointing out that it's mathematically impossible to build such an access mechanism that can't be found and exploited by others.

Comey, and others, seem to think that it is possible, despite offering no evidence to support this view. Instead they want to force the technology industry to invent a way to make it possible for them to defeat encryption.

Even supposing such a system was possible and police got a golden key to crypto, there's no guarantee that the method wouldn't leak out. As we saw with the Microsoft Secure Boot fiasco, even the most sensitive golden keys can leak, and a method to break all American crypto systems would be top of the wish list for criminals and foreign powers.

Comey's argument is also predicated on the assumption that criminals will only use American crypto systems. At the last count, two-thirds of the crypto systems out there come from outside the Land of the FreeTM and so would be unaffected.

US tech firms are, of course, very worried about law enforcement's plans. If implemented, any backdoor would kill their sales, both domestically and internationally. American technology sales have already suffered post-Snowden and selling broken crypto would accelerate this decline. ®