Expect them ASAP once the EMC deal closes, which will be real soon now 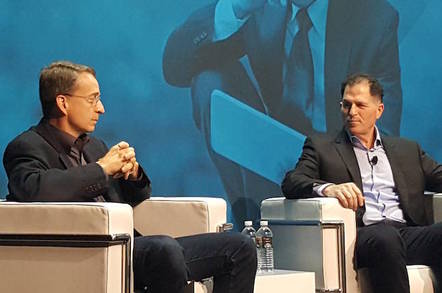 Vmworld Michael Dell today told VMworld 2016 in Las Vegas that as soon as the deal to acquire EMC closes “you will see a whole new series of engineered solutions we have been working on together.”

The “we” is Dell, EMC and VMware, as Dell made the remarks while sharing a stage with VMware CEO Pat Gelsinger. Dell, the man, didn't say much more other than saying that enterprise customers want to access innovations from top IT companies and Dell plans to deliver them in as many configurations as customers want. He hailed the EMC-spawned VCE's converged and hyper-converged as proof of buyers' liking for the best of all possible worlds and said that desire means Dell will keep working with Microsoft. Even when, as will happen when Dell releases its Azure Stack hardware, it competes with VMware which it will soon own.

But The Register understands that whenever possible, Dell servers will ship with pre-installed vSphere. So there will be some favouritism.

This will start to happen “soon”, within Dell the company's prediction that the EMC deal would close between May and October 2016. Dell the man said discussions with Chinese regulators are ongoing and positive, as China remains the only major jurisdiction in which the deal has not received approval.

Dell the man did not elaborate on what the new engineered boxen might comprise, but Gelsinger offered some hints about the kind of directions VMware will take once the Dell, the company, closes the deal. Gelsinger said Dell, the company, has a far bigger presence in India than VMware and that he no longer has to worry about how to enter markets in third-and-fourth-tier cities. VMware can instead educate the local Dell presence and/or channel and perhaps also cook some new products targeting such regions. Gelsinger's optimistic that such locales could even represent virgin territory for server virtualisation, making them a possible new market for vSphere.

Gelsinger and Dell also both went out of their ways to emphasise VMware will continue to enjoy the same level of autonomy it does today. The VMware CEO recounted how Dell, the man, recognised that Virtzilla's deeper relationship with IBM would be good for VMware and therefore signed it off without pause. ®