Doing Internet of Things stuff? There's one for you, too 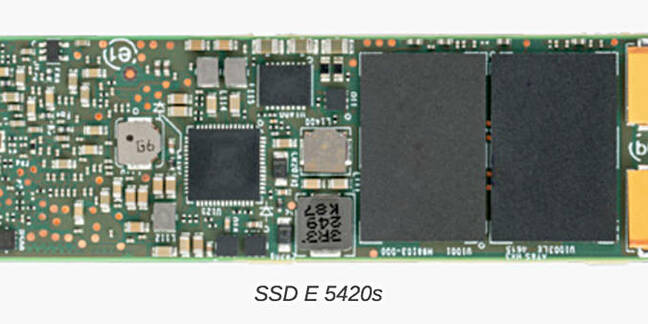 Chipzilla says these are the first of many utilising 3D NAND technology and we expect some of the existing 2D (planar) NAND drives to fall out of favour and be retired. The new product list is:

The device comes in M.2 format with a PCIe Gen 3x4 NVMe interface. I has a 1.6 million hours MTBF rating but no drive writes per day (DWPD) figure is supplied and nor is its latency. The 600p has a five year warranty and AES 256-bit encryption.

The Pro 6000p appears to top out the existing business client SSD range, the Pro 5400s, Pro 2500, Pro 1500 and 750 Series. The only spec-list difference we spotted between the 600P and Pro 6000p is that the latter is a 600p with added support for remote secure erase by Intel's Active Management Technology. Its performance appears to be the same as the 600p's.

The S3520 is a more complicated beast, coming in 2.5-inch and M.2 6Gbit/s SATA formats. Intel says it's made from MLC 3D NAND wiith 16nm geometry, which is a surprisingly low cell size for 3D NAND. (see page 2 of this datasheet, PDF)

Compared to the S3510 the S3520 needs 15 per cent lower idle power, 30 per cent lower active write power and has 35 per cent more performance/watt. Its endurance has been increased to one DWPD from the S3510's 0.3DWPD. We guess the S3510 just got replaced.

Chipzilla has made SSDs for embedded system use for some time, including the E 5400s and E5410s. Now we have the E 5420s and Intel is calling this its IoT range of SSDs, with digital signage, point-of-sale terminals and ATMs in mind.

It has a 10mW idle power rating and a five year warranty.

This drive has AES 256-bit encryption, a two million hours MTBF rating and endurance of one DWPD.

For brochure and spec information on these new SSDs hit this URL. The 600p is available now; think 256GB $130 and 1TB $460. The others will be along later. And if you have read this far, you deserve a cup of refreshing coffee and a biscuit. ®