A USB stick as a file server? We've done it!

SanDisk's 'Connect Wireless Stick' is made for mobile, but we've bent it to become a 'Campfire NAS' 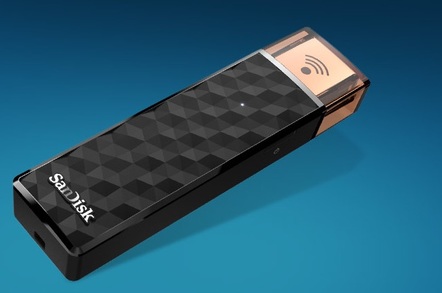 It's a USB stick with a WiFi access point baked in and is intended as networked storage for mobile devices. The idea is that you'll load the stick full of music and movies, then install the companion app on your iThing or Android, point those devices at the stick's WiFi and enjoy the content it stores. All this will happen without touching your mobile device's precious internal memory capacity or burning through mobile download allowances.

Which got your correspondent wondering if it could also work as a file server for PCs if permanently plugged in to a power source or USB battery.

To get it done, configure the Wireless Stick so that it connects to your WiFi network instead of going peer-to-peer with mobile devices. Next, go into the app and navigate to Settings/About to find its IP address. Type that IP address into a browser on a PC or Mac.

You should soon see the device's web interface which makes it easy to access the stick's contents and perform drag-and-drop uploads from a PC or Mac to the stick.

I was also able to mount the drive on both Mac and PC. On OS X open the Finder, use the Go menu, select “Connect to Server”, feed in the IP address and – presto! - the device's root directory should spawn a window in the Finder. Under Windows I used Map Network Drive and fed it the address \\xxx.xxx.xxx.xxx\files\. Up came the stick as a network drive.

The device is no speed demon: I uploaded a 100MB file over my domestic 802.11ac router and it took 3.5 minutes to finish the transfer. The same job took 22 seconds when I used the first conventional USB stick I could find on my desk and transferred the file from a Mac to the stick.

Downloads are faster: the 100MB file made its way from the stick to my Mac in a rather better 48 seconds. Those results are fair enough as cheap NAND in USB sticks isn't optimised for writes.

The Connect Wireless Stick comes in a 200GB variant, a decent amount of storage that might just hint at shared storage possibilities. I can't imagine using this as serious storage even though the web interface means setup is swift, simple and probably rather easier to arrange than sharing a volume and connecting devices over WiFi.

But for sheer fun it has appeal as a campfire NAS - a “Campfiler” if you will - plugged into a USB battery. Because who can go camping these days without shared storage?

And who can end a story without a pause to ponder security, because if your people are connecting directly to this device's WiFi it looks like an interesting way to challenge data loss prevention tools.