Kindle Paperwhites turn Windows 10 PCs into paperweights: Plugging one in 'triggers a BSOD' 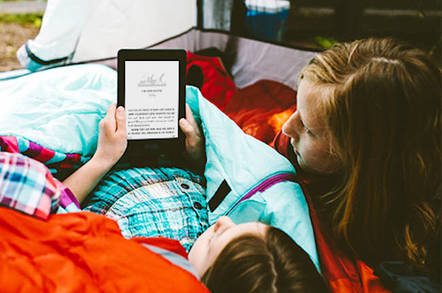 Plugging a Kindle Paperwhite into a PC running Windows 10 with the Anniversary Update installed sparks a full system meltdown, it is claimed.

Connecting the Amazon e-reader to a fully up-to-date W10 machine via USB triggers an immediate Blue Screen of Death, according to complaints on Microsoft's support forum. All the trouble started when people downloaded and installed the Anniversary Update, which arrived at the turn of the month. That's the same upgrade that has knackered millions of webcams and caused some systems to freeze up.

The crash kicks off in the storage partition driver partmgr.sys, with a bugcheck code 0x7E (SYSTEM_THREAD_EXCEPTION_NOT_HANDLED) and cause code 0xC0000005 (STATUS_ACCESS_VIOLATION) – in other words, a kernel-level thread in the driver touched memory it shouldn't have, and blew away the environment. It sounds like Windows is trying to mount the filesystem on the Kindle as a removable storage device and getting completely confused.

Some people say the BSOD only happens when they plug their Kindle into a USB 3.0 port, others say inserting it into a USB 2 interface triggers the crash too. Some people always get a crash, some most of the time, and others have reported experiencing no problems at all.

I recently [installed] the summer Anniversary Update for Windows 10 on both my laptop and my desktop which went without any errors. Today I plugged in a Kindle Paperwhite and it immediately crashed my laptop to a blue screen.

I figured it might be a driver issue even though my laptop is fairly new, so I plugged it into my desktop and got the exact same thing. A Blue Screen of Death. Just for more info, it is a Kindle Paperwhite being plugged into USB 3.0 ports on a HP laptop and Dell desktop both running the latest Windows. It's pretty frustrating because I need to transfer some PDFs to the Kindle for my son's school classes.

I have the same problem with my Asus K53SV laptop and my Lenovo 100S netbook after [installing the] Anniversary Update for Windows 10. I plug in the Kindle Paperwhite and both laptops almost always crash to a blue screen and then reboot. After they reboot, the Kindle is visible and usable as a USB device as if nothing happened. I can browse files on the Kindle and I can use Calibre with Kindle. After the crash and reboot, I can even eject the Kindle and plug it back in without any problems – at least during that session. If I then shut down my laptop, plugging in my Kindle the next time will crash my laptop again and reboot it, and then I can normally use Kindle again. Needless to say, this is annoying.

All very mysterious. So far, there is no mention of any fix, and no word from Microsoft. One workaround is to plug the Kindle into the machine during boot-up or while the computer is sleeping. That seems to avoid crashing the operating system.

A spokesperson for Microsoft was not available for comment. ®