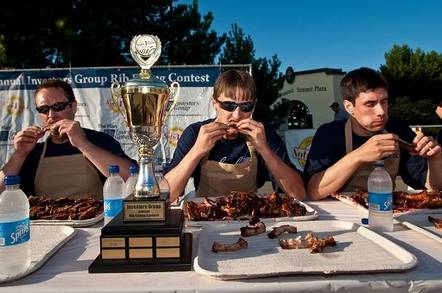 Analysis Sprint and T-Mobile US are introducing "all you can eat" internet plans, and as you might expect, someone at the Electronic Frontier Foundation in San Francisco is horrified. Somebody always is.

The EFF tut-tutted at dirt-poor Indian farmers getting Ceefax pages on their mobiles for free – and the Indians obligingly banned it. The EFF tut-tutted at Netflix peering directly with big ISPs to remove stutter from its movie streams, a much more efficient delivery arrangement that actually saved Netflix some money. The EFF tut-tutted at T‑Mobile US for working with video providers so videos wouldn't count against your bandwidth cap. But the Binge On deal proved so popular with customers, the EFF looked silly, and even sillier after Google joined Binge On.

It seems that no good deal can go unpunished, whatever it is – and if it offends the slacktivists' idea of internet purity, then it must be forbidden.

T‑Mobile US' problems with its ambitious new all-you-can-eat deal aren't oddball activists, but economics and physics. All-you-can-eat internet plans are never really all you can eat – nor can you reasonably expect them to be, given finite resources and cost constraints. And not one, anywhere, has lasted very long.

Deutsche Telekom-owned T‑Mobile US is the third largest of the four national mobile networks in America, and so it likes to make splashy pronouncements. It even pretends not to be a mobile network at all. But fair play to them, under CEO John Legere, T‑Mobile US has tried to simplify pricing, improve customer service, and innovate where it can, surpassing Sprint in the process.

The odd thing about T‑Mob's One plan is the echo of H3UK's One plan, launched in 2010. Back then, Hutchison's 3 was the fifth largest out of five operators and also liked to make splashy announcements. The One plan was a great way to entice new customers, and 3 shifted a lot of iPhones. But after four years it scaled 3 back, as it repositioned itself more upmarket. The One Plan became "unlimited data plus tethering," and you can still buy an unlimited bucket from 3. Now called the "Advanced Plan," it costs 33 quid and 30GB of hotspot data is thrown in, when you commit for a year.

T-Mobile US's One plan introduces a new pricing structure that rewards multi-SIM family packages but makes the on-ramp quite a bit steeper. It's $70 for one SIM, the second is $50, and each additional line is $20. So a family of four pays $40 a head for unlimited LTE. If you're Octomom, the price goes down to $20 per line.

(T-Mo says lower-priced plans will continue, starting at $50 for 2GB, but this is clearly a push to volume users and away from bargain hunters.)

T-Mobile US says the highest three per cent of users – those using more than 26GB of high-speed data per month – "may see their data traffic prioritized behind other users once they cross that threshold during their billing month."

CCS Insight notes that "in general, plans have adjusted to reasonable modern-day data use," meaning that you get what you pay for.

The biggest complaint about the small print that comes with AYCE plans is tethering. Laptop users expect broadband quality, not downsampled video streams. And they burn through a lot of data. T‑Mobile US has put tethering outside the One plan, as a $15 bolt-on, and that buys you 5GB of data.

It seems a sensible precaution. Full high-def video will also require an extra $25 a month per SIM. Ouch. Experience suggests that as long as operators put the caveats up front, people don't care. It's the bill shock that they really do mind. ®

For connoisseurs of net neutrality nuttiness, the Witchfinder General Barbara van Schewick offered the most far-fetched reasons for why T‑Mobile US's Binge On was eeeevil, here [PDF].

"A customer who has used almost all of her data could still binge on HBO, but would be unable to make an important video call with her doctor," she wrote. And best of all: "Binge On harms free expression by favoring commercial entertainment over other forms of video content." Like watching lectures by law professors on net neutrality, I suppose, or Albanian folk-dancing. ®