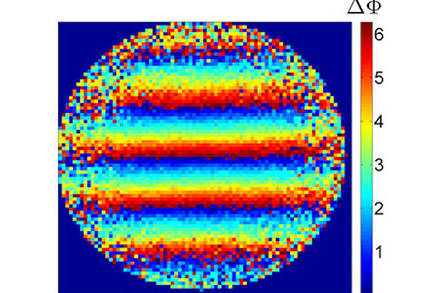 The United States' National Institute of Standards and Technology (NIST) thinks it can use a cloud of atoms as a gyroscope.

The point is navigation: the agency reckons the little gyro is part of work on ultra-precise navigation for applications like space and submarines.

It measures rotation by analysing patterns of “interfering matter waves in an expanding cloud of atoms transitioning between two energy states,” NIST explains.

The speed of each atom determines its position in the cloud, and the size of its rotational signal. The rotation is measured by interferometry: “rotations generate interfering bands of atoms across images of the final cloud”.

Colour coding in the image below “indicates how much the interference patterns shift in radians, the standard unit of angular measure. The orientation of the interfering bands (horizontal in the image) indicates the rotation axis. The rotation rate, determined by an analysis of the band spacing, is 44 milliradians per second.”

To get this working, NIST uses about eight million rubidium atoms in a glass chamber. A laser energises them while they're falling under gravity, and as the atoms absorb and emit photons, giving them momentum and causing “matter waves to separate and later recombine to interfere.”

A second, weaker laser illuminates them again and an interferometer makes the measurement: the atoms' absorption wavelength depends on their energy state, so different colours provide the measurement.

The setup can also be used as an accelerometer, and as NIST notes, the gyro/accelerometer combo would be useful for “dead reckoning” navigation, which measures change of position without reference to landmarks or start.

The US Navy will watch that development with interest. Regular readers will know that the seafarers are re-learning old-style navigation skills, so they won't get lost if hackers fuzz their GPS signals. ®

Knocked down, now up again, you just can't keep it down

US Military enlists radio hams to simulate fight with THE SUN

A safe distance from the Piers Gaveston dining society