Proxima b is a likely target for Starshot project 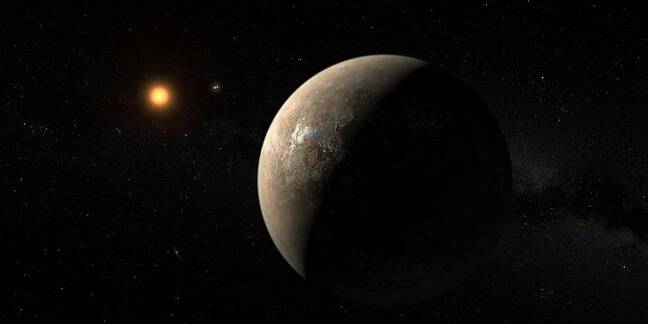 Rumours that a terrestrial planet orbiting Proxima Centauri – the Sun’s closest neighbour – may be Earth-like have been confirmed today in a paper published in Nature.

The possibility that extraterrestrial life may exist next door was first reported last week in Der Spiegel, a German weekly news magazine.

Excitement bubbled over and the European Southern Observatory refused to confirm or deny the rumours, as it wanted to keep the research under wraps. But it eventually gave in, and announced that all details would be revealed at the end of August.

Tantalising evidence shows the candidate planet, known as Proxima b, may be small and rocky and lies in the habitable zone around its star – just like Earth.

Proxima b’s equilibrium temperature is within the range where water may be in liquid form on its surface, the researchers believe.

It orbits around Proxima Centauri, a red-dwarf located only 4.25 light years away in the closest star system, Alpha Centauri. It’s much closer to its star than the Earth is to the Sun at 0.05 astronomical units away, so a year only lasts 11.2 days.

How Earth-like is Proxima b?

Although the signs are promising, it’s completely hypothetical that Proxima b is Earth-like, the researchers said. 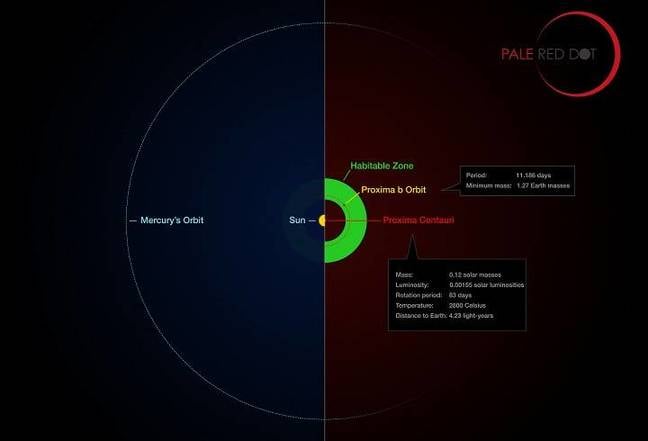 Infographic compares the orbit of Proxima b around Proxima Centauri with the same region of the Solar System
[Photo credit: ESO/M. Kornmesser/G. Coleman]

Professor Hugh Jones, who was part of the large team analysing data from Proxima b and a physics lecturer at the University of Hertfordshire, told The Register: “Saying it’s more Earth-like than just its mass is speculative. It’s exciting because it’s the first time anybody has found a planet around the closest stars. We have been looking for ages.”

Sixteen years ago, researchers first spotted a signal that Proxima Centauri could be harbouring a planet. It took a while for confirmation because of the faint signal, Jones said.

Proxima Centauri is a faint star with a luminosity much lower than the Sun. Its surface temperature is 3,050 kelvin, as compared to the Sun's 5,777 kelvin. Researchers used Doppler spectroscopy to measure changes in the velocity of the star caused by a gravitationally bound body that was orbiting around it.

The Doppler method is an effective way of detecting exoplanets, but it doesn’t give much information about the planet itself. Many properties, including Proxima b’s radius, are currently unknown.

That doesn’t dampen the spirits of scientists and engineers working on the Breakthrough Starshot project, however.

Starshot was launched in April 2016 by Russian billionaire Yuri Milner and acclaimed physicist Stephen Hawking. The project aims to send tiny "nanocrafts" to the Alpha Centauri system, about 25 trillion miles away, at 15 to 20 per cent of the speed of light.

Speaking about the research, Professor Avi Loeb, Chairman of the Breakthrough Starshot advisory committee and researcher at Harvard University, told The Register: “We will celebrate this important discovery within the Starshot team.”

“The discovery of the habitable planet around the nearest star, Proxima Centauri, is strategically important for motivating the Breakthrough Starshot initiative, since it provides an obvious target for a flyby mission.

“A spacecraft equipped with a camera and various filters could take color images of the planet and infer whether it is green (harboring life as we know it), blue (with water oceans on its surface) or just brown (dry rock),” Loeb said. 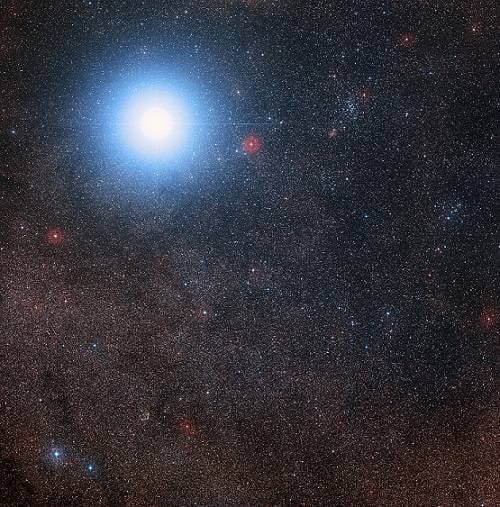 Proxima b has another property that increases its chances of harbouring life, Loeb, who was uninvolved in the research, said.

"Low-mass stars burn nuclear fuel at a slower rate, so they are more likely to live longer. Proxima Centauri is smaller than our Sun and will live about a thousand times longer. This means that any life on the planet has a longer time to develop and survive," Loeb told The Register.

"Hence, a habitable rocky planet around Proxima would be the most natural location to where our civilization could aspire to move after the Sun will die, five billion years from now."

The prospect of nanobots venturing to Proxima b to take photos is still very far away, and with current technology it’s still difficult to resolve Proxima b from its star. But with better telescopes and sensitive instruments being built in the next decade, the close proximity of Proxima b gives researchers their best fighting chance yet of looking out for extraterrestrial life. ®

Cancel your summer trip to nearby Proxima b. No chance of life, room service, say boffins

It's cold outside, there's no kind of atmosphere ... I'm all alone

Shh! Proxima Centauri can hear us!

Proxima Centauri b roasted by colossal solar flare, probably not for the first time

Boffins: Sun's red dwarf neighbour is looking a little thick around the middle

In 71,000 years, it'll be closer than disappointing dustball Proxima Centauri b

To get that 'customer experience'

One of the 'super-Earth' finds might even have liquid water

Another day, another bit integrated