Efforts to preserve aircraft carrier for the nation failed 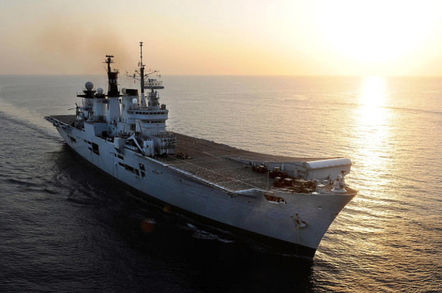 Aircraft carrier HMS Illustrious will be sold for scrap in spite of efforts to preserve her for the nation as a museum ship, according to reports.

The warship – affectionately known as “Lusty” – is set to be sold to Turkey's LEYAL Ship Recycling for £2.1m, according to The Sun.

Launched in 1978, Lusty was still being fitted out when the Falklands War broke out in early 1982. Her sister ship HMS Invincible was rapidly dispatched down south along with strike carrier HMS Hermes, and Lusty relieved Invincible almost as soon as hostilities were over.

Originally built as a proper aircraft carrier, Lusty was modified into a dedicated helicopter carrier after the Harrier jump-jet was withdrawn from British service. It marked the first time the Royal Navy had abandoned fixed-wing aircraft operation at sea since WWII.

Fast jet carrier operations will resume with the introduction of HMS Queen Elizabeth, the first of the Royal Navy's two new super-carriers, in 2018. HMS Ocean, a purpose-built helicopter carrier, is currently the UK's only flat-top warship. She is scheduled to be withdrawn in 2018 as QE enters regular service.

Illustrious is currently laid up in Portsmouth, being stripped of her sensitive equipment – and the anti-radar coating on her outside structure.

An MoD spokesman told The Register: “The process to determine the future of the former HMS Illustrious has not yet concluded. We will update with our final decision in due course.”

The tender documents for the warship were marked "archived" on 18 August - three months after they had expired.

Of interest to Reg readers will be the fact that her original main command-and-control system was written in programming language Ada, which itself was developed for the US Department of Defense.

Lusty's Astrium SCOT 5 satellite communications system – now ripped out – could reportedly support data rates of up to 2Mbps – and that system talked to the alarmingly named Skynet 5 military satellite constellation. Skynet 5 itself consists of four EU-built satellites leased by the Ministry of Defence. In terms of warship command-and-control systems, Ada-based OSes are still used on Britain's nuclear submarine fleet – but not on newer surface combatants, which run on Windows for Warships.

LEYAL has, so far, scrapped 18 of Britain's Cold War-era warships, including six Type 42 destroyers; the frigate HMS Plymouth – the ship aboard which Argentina signed her surrender at the end of the Falklands War; and Lusty's fellow carriers, HMS Invincible and HMS Ark Royal. Former sailors were able to apply to the scrapyard for a piece of their warship's hull as a memento, according to the government report [PDF] about Ark Royal's scrapping. ®