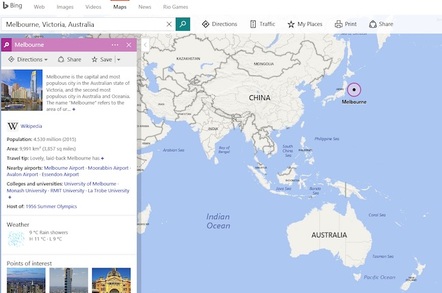 No, Melbourne is not just off Japan. It's in Australia.

Microsoft has misplaced Melbourne, the four-million-inhabitant capital of the Australian State of Victoria.

The co-ordinates are right save for one important detail: Melbourne is at 37.8136° South. Bing's therefore put it in the wrong hemisphere.

The Register's Australian outpost has tried searching for a few other major cities in Victoria and beyond and believes this is an isolated and probably-fat-fingered error.

If you know better, hit the comments.

Bing's not alone in finding Australia hard to navigate: in 2012 police warned not to use Apple Maps as it directed those seeking the rural Victorian town of Mildura into the middle of a desert. Apple Maps also sent those looking for the remote city of Mount Isa to an even less hospitable and more remote part of Australia's great inland deserts. ®

Hat-tip to reader James M who spotted the SNAFU.