We have a look at the latest cut 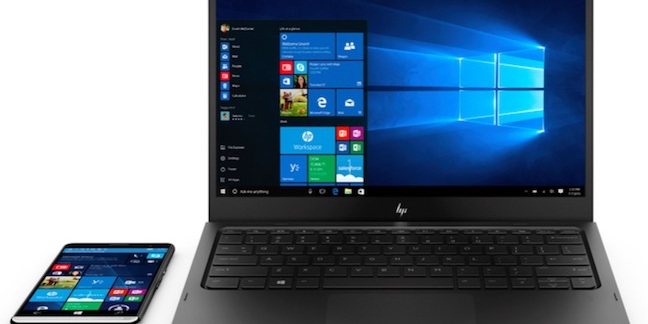 Hands On Microsoft’s Continuum is one of the spookiest computing experiences you can have. Either plug a phone into a dock, or turn on a nearby wireless display and keyboard, and the phone doubles up as an ersatz Windows PC. No more lugging a laptop around.

Back in January, we described Continuum reviewers as sharing the surprise and disdain that Samuel Johnson had for women preachers. So has much changed? Is Continuum still a limited use novelty or a transformative feature, allowing you to shed multiple devices for one very powerful, pocketable one?

HP is betting on the latter. HP has put a lot of thought and work into making Continuum usable, and so finding a profitable business niche. It’s about to debut not just a powerful Continuum-capable phone, but a static and mobile dock and a streaming app service that plugs the gaps left by lack of native x86 support.

So as a prelude to our rundown of HP’s work, we took Continuum for a work out with the latest cut of Windows 10 Mobile (this week’s, in fact) and the most powerful Continuum-capable Lumia, the 950 XL.

1. Your first time with Continuum really is a bit Wow. 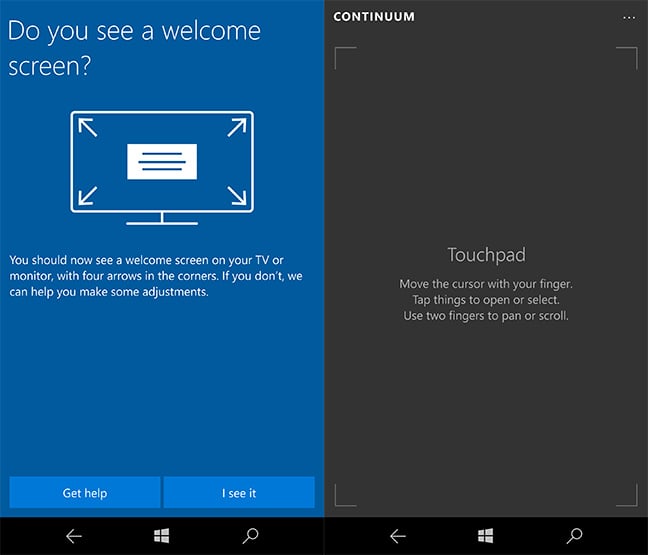 You can see why people dismiss Continuum as a novelty. It’s a pretty damn novel experience. First impressions are unsettling: yes, your phone really is a PC. It isn’t just projecting. Look! The same start menu. Look! The same wallpaper. Fire up Outlook Email and it’s really the same software!

In the latest builds of Windows 10 mobile, Edge really shines in Continuum. I kept trying to trip it up, but came back surprised. It’s just a pity that the latest Edge won’t run the handy extensions (ad blocker, Evernote clipper, Last Pass) that the desktop Edge can now run. Hmmph.

2. Faster and less buggy than before

Plug in, detach, and go: this basic part of the Continuum experience is really fundamental and should work perfectly. You shouldn’t get BSODs or catatonic screen flickering. And by and large it does. That wasn’t true a earlier this year, when the phone could have random seizures (and, yes, BSODs too).

Getting going with Continuum has obviously been a major focus for Microsoft this year, so much so it’s brushed aside niceties. It's really now plug it in and go. For example, I noticed every time I un-docked, there was a polite dialog box on the phone asking me whether I’d want to connect via a cable or wirelessly - a box that had been displayed back when I plugged the phone in. It’s just that Continuum is in such a rush to turn your phone’s display into a touchpad, you don’t see this request until you undock.

I found I could plug in a random, ancient USB headset and Continuum picked up the audio output stream nicely. (But wouldn’t take audio input.)

I’ve been trying Continuum with two Lumias, the 950XL and 950. The former has the notorious (for overheating) Qualcomm Snapdragon 810, last year’s flagship SoC. The latter runs the more modest Snapdragon 808. And you know what? It doesn’t really matter which you use. There’s a fraction more lag switching between apps, but not much. There’s a fraction of a second Alt-Tabbing, which brings up the expected thumbnails.

Here’s where the Wow wears off. Continuum only supports UWP [Universal Windows Platform] apps, and Microsoft provides a few of those out of the box on a Windows 10 device: Outlook email and Calendar, and the Office apps. Once you stray off the reservation, the app prospects gets thin. But before we get into that, you’ll notice something else first. What Continuum most desperately needs is for those UWP to work optimally. And right now, they don’t. UWP apps only run full screen, with some ludicrous consequences.

Full screen is fine for Word, or Excel – most of the time you’ll want every pixel devoted to the task in hand. But with a simple app like ToDoist, it’s just plain weird to see a simple, minimal two column app cast across a huge HD display. Even running two apps side by side would be vast improvement to your work. I’m not sure why this isn’t a priority for the Continuum team rather than clever tricks like screen scavenging (casting your session onto another PC), aka Project Rome. But early adopters will find this a bit baffling. 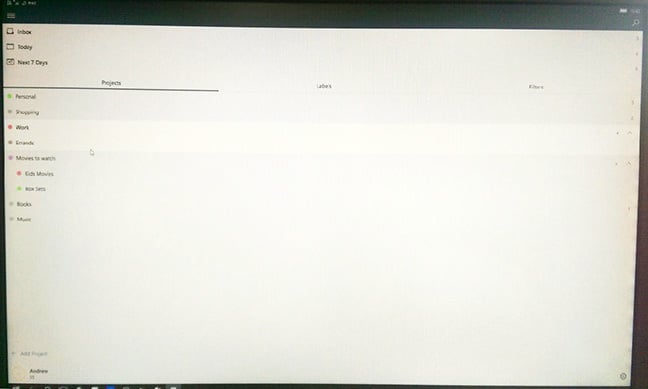 Optimisations needed: ToDoist on a giant HD display doesn't make great use of the space

One UI omission causes a minor wrinkle when it comes to closing apps down. With no close dialog button on the apps, you do this from the task switcher (Alt-Tab). Some apps use the space really well - an honorary mention should go to phone blog Windows Central which in its article view, displays the comments in a column beside the story. It’s a model implementation.

And here’s the rub, and Continuum’s biggest problem right now. The apps you thought you could run can’t, and remain greyed out on the Start Menu. Continuum-compliant UWP apps are only trickling into the Windows Store, slowly. 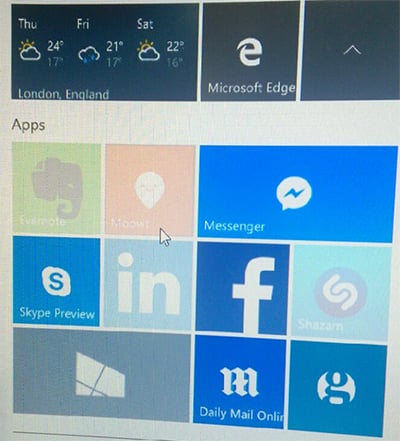 A typical bunch of Windows Store apps. Many are greyed out, and will only work on the device itself

So there’s a UWP Facebook and Twitter, and even a UWP Daily Mail, which produces a nightmarish experience as an amplified, pixellated Sidebar of Shame blasts into your face in HD, a collage of ISIS atrocities and boob jobs that really belongs in A Clockwork Orange. But alas, Slack and Evernote haven’t made the journey to UWP yet. For me, they’re indispensable for the day job. (Tip: Beware the Slack trap, and try almost anything else.) So it’s a deal-breaker to keep picking up the phone to reply to an IM. It's a deal breaker too that I can't access years of files which I need on-hand and searchable. The native software doesn't do that. It's going to need a virtualised kludge to run.

I appreciate that making Continuum UWP-only is a political choice by Microsoft. Much of the point of Continuum is to lure the Windows developer base forward, onto a more modern platform which is essentially display independent, by demonstrating new use cases. That’s a noble goal. But for now, Continuum guinea pigs will find going back to their phones a bit baffling and frustrating.

Technically there shouldn’t be any impediment. With 3GB of RAM inside the phone, and an octocre chip, there’s enough horsepower to display a Silverlight app that flew in a much more humble device a year or two back.

Microsoft points out that Edge can run the Citrix client, and HP has done something similar to plug the cap with HP Workspace - as we’ll soon see. So Continuum desperately needs those UWP apps. With Remix OS and Google's Android-ified Chrome coming up, the competition will be fierce: the Play Store is stuffed with apps, including Microsoft's own. 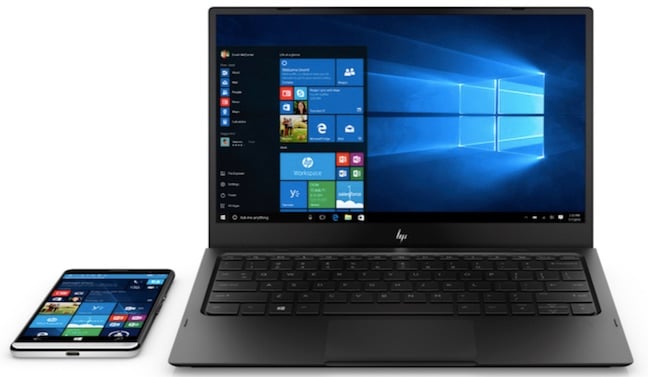 Continuum is clearly a work in progress, and I reckon it has leaped over the first hurdle. If the goal is to allow users to carry only one device, then I’d like to see much more focus on the UX - starting with multiple window support.

To recap, HP has a beast of a phone – the Elite x3 – with two docks. One is a static desk stand, the other a kind of “hollowed out laptop” - the “Lap Dock”. This looks like a 12.5 inch laptop, and has a HD display and battery. The x3 phone is the “CPU and motherboard”. We’ll report back next week on how HP’s hefty investment in Continuum is looking.

So, Continuum. A dog walking on its hind legs? An expensive way to turn your phone into a slow netbook? There's a grain of truth to this criticism, but the potential is there, for sure. ®