And the sound of robot drivers is something quite ferocious 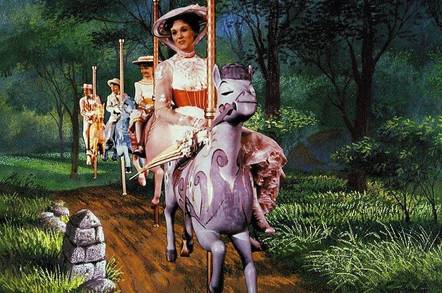 Merry pawwpins ... How Disney anticipated our automated transit of the future

A California judge has rejected the nearly $100m settlement deal between Uber and a group of aggrieved drivers.

Judge Edward Chen said on Thursday [PDF] the dial-a-ride app maker's proposed settlement package "as a whole as currently structured is not fair, adequate, and reasonable." The drivers are suing Uber, accusing the San Francisco biz of breaking labor laws, and Uber is trying to settle the class action out of court.

Chen said that Uber's proposed deal – in which the drivers would have been paid roughly $84m to give up their claims that Uber broke rules on tips and other labor rights – was too much in favor of Uber and did not afford the drivers adequate protections.

Specifically, Chen said, the non-cash portions of the deal would not bring drivers the additional employment protections, higher pay, and arbitration rights they had been seeking when they filed suit.

"The Settlement Agreement is, of course, not limited to the $84 million payment, but includes a number of non-monetary relief that also provide benefits to the class," Chen said.

"However, much of this non-monetary relief is not as valuable as the parties suggest, limiting their worth in considering the amount being offered in settlement."

Chen notes a number of problem areas, including the proposed arbitration process (for handling driver suspensions and terminations), as well as a revised tips policy that doesn't do enough to ensure better pay for the drivers, in ordering that the proposed deal be scrapped.

The decision is hardly a shock, as Chen has previously shown skepticism to the deal while a number of drivers have formally complained the terms of the deal were unfair.

With the settlement having been thrown out, Uber and the drivers will now have the option of negotiating a new settlement package or taking the case to trial before a jury.

Meanwhile, Uber is experimenting with cars that can drive themselves without any pesky lawyer-hiring humans at the wheel. A pilot program underway in Pittsburgh, Pennsylvania, aims to put self-driving Uber cars into service within the next several weeks.

Though the cars will be driving themselves, Uber says a human driver will be behind the wheel to "supervise" the operation of the vehicle and help train their artificial brains. The overall plan is to eventually flood America's streets with robo-rides for people to hail from their phones, with a few human drivers kept around to ferry people to areas computers find too tricky to drive through.

Uber has also just bought self-driving truck startup Otto so it can get into the cyber-delivery business. ®