Viscous liquid oozing down the walls? You must have hives

Hospital combed for cause of sweet infection 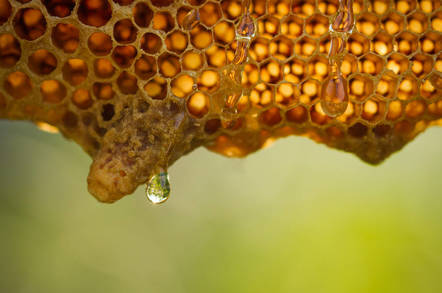 Pest control was called to Rockwood Hospital, Cardiff after elderly patients noticed honey oozing from the ceiling and dripping down the walls.

More than 110,000 bees spread over two colonies were found lodged in opposite sides of the hospital roof.

Health workers used towels to soak up the honey pool on the floor before The Tree Bee Society, a not-for-profit company interested in protecting bees, came to the rescue.

The hot weather had melted the honeycomb - the hexagonal wax structure that holds honey and bee larvae.

"It may sound like something of biblical proportions, honey coming through the walls and ceiling, but people walking past wouldn't have noticed the hive and it kept growing," said Abigail Reade, staff member at The Tree Bee Society.

The pest control team safely removed the bees by using a circular saw to cut around the nests before transferring them to boxes.

Finding bees nesting in hospitals is a little unusual, Reade told The Register. “But it's not unusual for bees to get into roofs or walls. They’ll get into any cavity.”

“They would have swarmed and reproduced to make the other colony. The hives are both carbon copies of each other,” said Reade.

“The bees could have expanded as little or as much as they liked. The roof is 50ft along each side and the bees had taken up about 4ft of space.”

The bees will be carted off to West Lancashire, where The Tree Bee Society is based, so that they can live out their days happily in a field nearby.

Wales Online has video and pics. ®

What was second prize? We think we'd rather have that

What a bee-lief! UK's asian hornet outbreak is over ... for now

No live sightings have been reported since October

Hands on responsibility for media manufacture, customer support to PCS