You're fired – into space 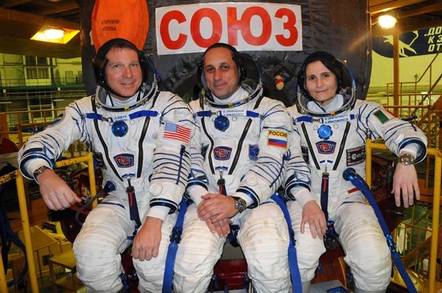 NASA has confirmed that the Russian Federal Space Agency Roscosmos is mulling whether or not to continue staffing the International Space Station with its usual complement of astronauts.

Last week the Russian newspaper Izvestia quoted Sergei Krikalev, director of manned programs at Roscosmos, saying that the agency had approached NASA about reducing its standard ISS crew count from three to two. Russia has had three astronauts on rotation in the ISS since 2010, but apparently that will be changing.

Krikalev said that delays in building the Russian Multipurpose Laboratory Module (MLM), the nodal unit (a structural join), and the scientific and power module – let alone lofting them into orbit – meant there was no need for three local astronauts on station. Cutting one would save money and allow Russia to auction off the place to space tourists.

In a press conference on Monday, Kenneth Todd, NASA's operations integration manager for the ISS, confirmed negotiations over the redundancy had begun, the Planetary Society reports.

"They're exploring the option of going down to two crew on the Russian segment," he said.

"We'll look at it as we do with all these kind of things – we'll trade it against whatever risk that might put into the program, first and foremost the risk to our crew onboard, and the station itself. From there, we start looking at the options and see what we can do as a partnership to either accommodate it or help them realize why that's a bad thing."

Russia's MLM was due to have been sent into orbit back in 2007, but delays in building the hardware and launch delays mean that the earliest it will be sent up is now 2017. The other two modules have suffered similar problems and may be delayed to 2019 or later.

At the heart of the Roscosmos decision is a funding double-whammy. Falling oil prices, as well as sanctions, have hurt the Russian economy and the space agency has had its budget slashed to a tenth of that of its Yankee counterpart.

To make life more difficult, the Russians can no longer bank on getting cash from NASA for astronaut delivery past 2017. SpaceX should be ready to start sending crew to the ISS by then and Boeing is planning flights by 2018, so the $80m per launch Roscosmos was getting will no longer be coming in.

"One thing that we certainly always keep in the back of our mind is that our Russian partners are committed to the program at least through 2024," said Todd. "There's no doubt they're keeping that in mind as they work through whatever challenges they have within their system." ®