Cops break up German sausage fight between pair of Neubrandenburgers 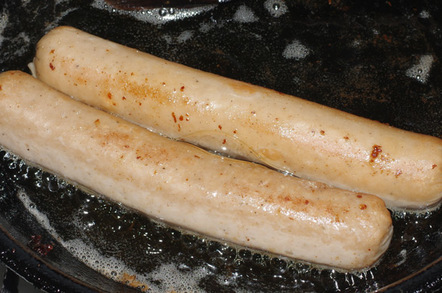 German police were called to an outbreak of sausage-related violence this week, after a man used a mega wurst to inflict serious damage on a BMW.

According to a police report, a parking dispute between two men in the town of Neubrandenburg Oststadt quickly descended into threats and insults, then a shoving match.

Things spiralled further out of control when one of the Neubrandenburgers hurled a 30cm long sausage at his rival’s BMW, causing what police described as a 1cm wide dent on the rear right door.

Curiously, the type of sausage was not detailed, which seems a massive omission in a country where sausages invoke feelings of immense regional pride – from floppier varieties such as liverwurst and frankfurters, to salami-like pre-cooked types like Mettwurst, Holsteiners or Kochwurst, some of which can reach monstrous proportions.

Apparently, it was a metal clip on the sausage that caused the actual damage, which doesn’t actually preclude some of the softer varieties. However, it seems far more likely that it was a clip from one of the heftier, denser varieties that gouged the beemer. It is also more likely to have matched the 30cm dimension.

Shockingly, this is far from the first outbreak of sausage-related violence this summer. In May, a vegan cafe in Tbilisi Georgia was attacked by a group of “sausage-wielding nationalists”. The gang of alleged far right extremists apparently barged into Kiwi Cage wearing sausages around their necks and carrying slabs of meat on skewers, as well as fish secreted about their persons. Once in the cafe, they threw the meaty products on diners plates, and only fled once police were called.

In April the AGM of car giant Daimler was disrupted when police were called to deal with a penny-pinching shareholder who didn’t just over-help himself at the buffet, but started wrapping up Saitenwürschtle to bring home. A reprimand from a fellow shareholder quickly descended into a slanging match. Apparently 12,500 sausages were served at the event, which attracted 5,500 people.

As Daimler chairman Manfred Bischoff, said of the incident: “We either need more sausages or we get rid of them altogether.” ®