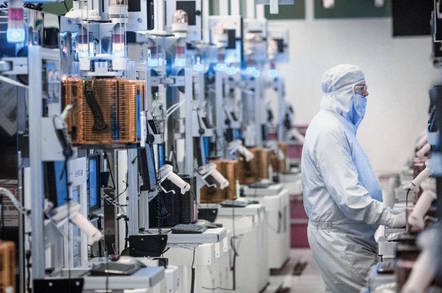 Bunny suit ... An Intel Custom Foundry worker in the fab

The state-of-the-art factories will produce the mobile system-on-chips for LG Electronics using a 10nm process, with the door left wide open for other ARM licensees to jump in and use the assembly lines.

At the heart of the collaboration deal between ARM and Intel is ARM's Artisan Physical IP, the building blocks for designing and fabricating system-on-chips. Intel will now accept orders for Artisan-based designs on its 10nm production lines, effectively cranking out powerful ARM-Cortex-based processors and similar products.

This is a major step for Intel: rather than produce Intel designs using Intel tools in Intel fabs, it will now churn out processors for a completely different architecture – ARM.

The news – which emerged today at this year's Intel Developer Forum in San Francisco – comes after Intel axed its x86 Atom CPUs aimed at mobile devices, effectively surrendering to the ARM-dominated handheld world, in April. It also comes after Softbank gobbled up ARM for $32bn. In 2010, Intel opened up its fabs for customers' own silicon blueprints, chasing the commercial success of factories-for-hire TSMC and GlobalFoundries.

Intel couldn't compete on the CPU architecture level for smartphones and tablets, so it's gone one layer lower, to the fab level where it is king and where it can potentially ruin Samsung's day.

The 10nm FinFET ARM chips will be produced by the Intel Custom Foundry, bringing the high-performance and low-power benefits of the process node to ARM-based cores.

LG will use the fabs for its next-gen 64-bit ARMv8 mobile SoCs, and Spreadtrum will use the assembly lines for 14nm ARM chips. Achronix Semiconductor is already using the Custom Foundry for 22nm Speedster 22i HD1000 parts, Netronome is having 22nm networking processors NFP-6480 produced, and Intel-owned Altera is using the fabs to churn out 14nm FPGAs.

"ARM and Intel Custom Foundry have announced an agreement to accelerate the development and implementation of ARM SoCs on Intel's 10nm process," said ARM's Will Abbey on Tuesday.

"ARM is a leader in processor and physical design, and Intel Custom Foundry is a leading integrated device manufacturer. This combination is a win-win for customers."

What does that mean in plain English? "Intel will run 10nm ARM parts for LG. In fact, and by adding Artisan IP, Intel will be able to do many more ARM mobile SoCs," tech industry analyst Patrick Moorhead told El Reg during IDF.

Moorhead added: "Intel now has the capability and the intellectual property to produce nearly any kind of silicon in their state of the art fabs, now including ARM-based silicon.