Hey, turn down that radio, it's alien season and we're hunting aliens 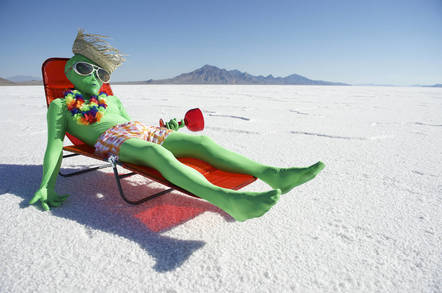 Some clever folks have started an experiment that will hunt for signs of alien civilisations using the Murchison Widefield Array – a low frequency radio telescope in western Australia.

Eggheads at Curtin University, Down Under, and the Istituto Nazionale di Astrofisica in Italy, have published a paper outlining the experiment today in the Astrophysical Journal.

In order to understand the nature of life in the universe, you have to look for it. Researchers at the SETI institute in California have a long history of using high-frequency radio waves to search for extraterrestrial intelligence.

Interestingly, though, this experiment by the Aussies and Italians uses low frequency radio waves in the range of 103 to 133MHz.

Past experiments were conducted at 1.4 to 1.7GHz range, also known as the “water hole” as it was where the radio spectral lines produced by neutral hydrogen and hydroxyl (OH) could be found. The presence of water is often associated with the possibility of life as it is considered a crucial component of life.

“That radio band is the cornerstone for of communications technologies on Earth, and it could be reasonably assumed that a similar path has been taken by extraterrestrial civilisations,” the paper said.

The pilot study will be performed using the Murchison Widefield Array, chosen for its high sensitivity, prime radio range, large field of view and is a located in an extremely radio quiet area over 200km inland from the western Australian coast.

The telescope will cover 400 square degrees field of view, where 45 exoplanets in 38 planetary systems known. Radio spectra from those systems will be analysed to find the limits on the presence of narrow line emission - which could signify the presence of chemicals suitable for life.

The researchers hope to carry further experiments into using low frequency waves using the Square Kilometre Array, a large multi-telescope project to be built in two sites: one in South Africa and the other close to Murchfield's silent perch in Australia. ®