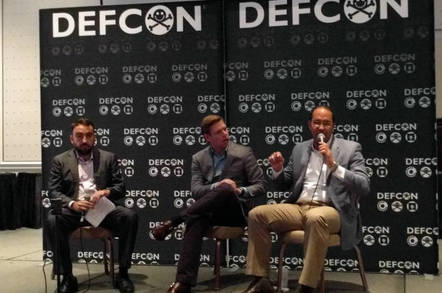 From left to right: Stamos, Swalwell, and Hurd

DEF CON It’s going to be at least a year or so, and probably a lot longer, before the United States Congress gets around to ruling on the second war on encryption, two members of the US House of Representatives told the DEF CON event.

Alex Stamos, chief security officer (CSO) of Facebook, hosted a panel with Representatives Eric Swalwell (D-CA) and Will Hurd (R-TX) to examine the current battle between some elements of law enforcement and technology communities over backdooring encryption standards and the news isn’t good.

Swalwell, a member of the House Permanent Select Committee on Intelligence and the Committee on Science, Space, and Technology, has co-sponsored a bill to set up a year-long consultation period to examine the issue, with technical experts and law enforcement weighing in. But with the US currently in election mode it’s unlikely to get started soon.

He said that the country has to avoid banning end-to-end unbreakable encryption on which ecommerce depends, but also had to take into account the needs of law enforcement to track suspects and bring them to justice.

“As a prosecutor the last three cases I got convictions on then the lynchpin was cellphone data; without that evidence we wouldn’t have had what we needed to prosecute,” he said.

“But the San Bernardino case highlighted the challenge, with the FBI using the 1789 All Writs Act. That they had to rely on legislation from 1789 is a failure of congress to update the law as it is related to technology," Swalwell said, "we’ve done nothing legislatively since encryption was built and we owe it to the technology community to make sure they know their rights.”

His opposite number Hurd, who consulted for a cybersecurity firm and served in the CIA before going into politics, agreed. Hurd pointed out that the San Bernardino iPhone turned out to have contained nothing of use to investigators and law enforcement has a duty to concentrate on traditional police work before it calls for encryption to be broken.

“Encryption is good for national security and for the economy, we should be spreading encryption not weakening it,” he said. “You don’t have to get into technology by these means, that has already been debunked. You just have to utilise old techniques.”

He pointed out that there was an international aspect to the case that is harming America. Non-US companies, particularly in Europe, were using the issue to introduce protectionist policies that are hurting American companies trying to sell their services abroad.

Hurd, who worked undercover in the Middle East and South Asia during his time at the CIA, also offered an interesting perspective on using technology to counter the machinations of medieval terror bastards ISIS. While the Daesh-bags have been very smart about using social media to recruit worldwide, these techniques could be a two-edged sword.

“In 2005, if you were an American and went into tribal areas of Pakistan offering to fight for Islam you’d get your head cut off,” he said. “Now people can, thanks to social media, but when you think about it that’s also an opportunity to insert human intelligence operatives.” ®