Is that you mom? No, it's my idiot ex-husband 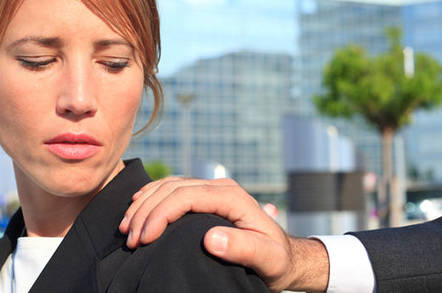 A man who faked the caller IDs of his ex-wife's contacts in order to harass her will be fined $25,000.

Gary Braver of North Bellmore, New York, and his work pal Steven Blumenstock faked the numbers of Robin Braver's mom and her child's school, among others, in order to trick her into answering her phone. When she did, they harassed her.

The two men used a fake caller ID service as well as a voice modulator to hide their identities, but according to Ms Braver they provided details of her life that were not public, such as her divorce and child custody battles, leading her to believe it was her ex-husband harassing her.

As well as pretending to come from people she knew, the two men also spoofed calls from local jails and told her that she would be joining them soon and had a jail cell waiting for her. They made lurid suggestions about what would happen to her with the other inmates.

Eventually, Ms Braver got so sick of the fake calls, which she called "deeply upsetting" and which often occurred several times a day, that she contacted the National Network to End Domestic Violence and asked for help. It, in turn, contacted the Federal Communications Commission (FCC).

She used her own third-party "unmasking" service to find out what the real number was and recorded some of the calls, providing them to the FCC.

That company released its records in response to subpoena and they confirmed that the service was used by Blumenstock's phone to call Ms Braver. He was arrested in February, 2016 and charged with one count of stalking and one count of aggravated harassment.

Not only is it against the law to "harass, defraud, or terrorize another person by spoofing or deliberately manipulating their caller ID," according to FCC enforcement bureau chief Travis LeBlanc, but it is illegal whether you do so directly or indirectly. Ms Braver had a protection order out against her ex-husband.

Ms Braver told investigators that she had no connection to Mr Blumenstock and that she was sure her ex-husband was behind the calls. Investigators then dug into Mr Braver's records and found frequent interactions between the two men, and that Mr Braver had also been personally involved in some of the harassing calls.

Under the law, the FCC is entitled to fine someone up to $10,000 for each violation up to a maximum of $1m. In that sense, both Gary Braver and Steven Blumenstock are getting off lightly with the $25,000 fine, applied against each of them, because the FCC noted that it is their first offence.

The order [PDF] does, however, note that if the two men can prove they are not able pay the fine, the FCC will look at reducing it further.

In short, it doesn't pay to be a douchebag. ®