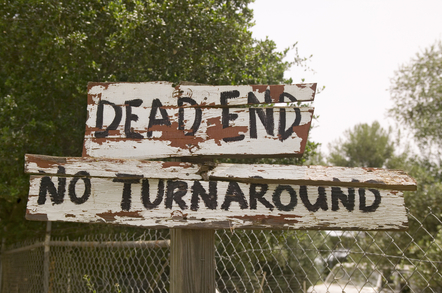 If a turnaround is happening at Systemax’s European reseller ops (Misco) then someone forgot to give the accountants the right numbers.

The Technology Products Group reported sales of $238.2m, down 5.6 per cent year-on-year for calendar Q2, while operating losses widened from $0.8m to $2.2m.

CEO Larry Reinhold said the operation in France had posted its tenth straight top line double-digit bounce, “despite a soft IT market” and the same percentage rise had been seen in the Netherlands.

But this was “offset by declines” in the other 11 markets in the region the company operates in, he said. “Turnaround efforts” in Blighty bore some fruit with the opening of a “north London” office in, er, Watford.

The day-long data centre wobble at the company in early April that pushed its online stores offline won't have helped pile on the sales, though Systemax has a flawless plan to head off future woes. It is called the cloud.

The quarter also saw the company review the German business that more recently led to a sale to CANCOM for an undisclosed sum. It was likely given away for free or a small fee, sources told us.

Reinhold said the company “continued to streamline” the business and “took additional steps to improve long-term profitability”. He didn’t specify what these were.

In December, Systemax sold its North America Technology Products reseller division to PCM for $14m but admitted the cost of getting shot of the loss-making arm was $55m.

El Chan anticipated big change across the European business and the divestment of the German wing was the first evidence of this. It is likely sub-optimal bits will be shuttered, or given away, and the bigger areas including the UK, France and Netherlands be sold. ®